Todd Akin: Sorry He Was Sorry.

Two years ago, Todd Akin kamikaze’d his career during an interview in which he said, “First of all, from what I understand from doctors, [pregnancy from rape] is really rare. If it’s a legitimate rape, the female body has ways to try to shut that whole thing down.” 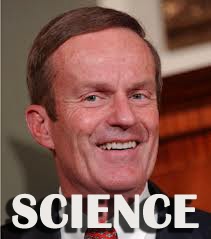 Akin apologized for the comment, but it was too late to stop his downfall.

Now Akin is gifting the public with another apology – he is sorry he said sorry.

By asking the public at large for forgiveness, I was validating the willful misinterpretation of what I had said. My comment about a woman’s body shutting the pregnancy down was directed to the impact of stress on fertilization. This is something fertility doctors debate and discuss. Doubt me? Google ‘stress and infertility,’ and you will find a library of research on the subject.

A library of research isn't conclusive evidence. A library of research might very well show the opposite of Akin’s claims. And the fact that, by Akin’s own admission, the subject is still debated implies there’s no conclusive position. Akin seems to be clarifying his position only by reinforcing the pseudo-science that people were accusing him of using in the first place.

After Googling it myself, I found that some studies noted an association between stress and inability to conceive, the mechanism of which is still unknown. But saying there's an association, or that those with exposure to stress "experience fewer conceptions," or stress "influences" fertility, does not mean that stress always prevents fertilization. It doesn't even mean stress usually prevents fertilization.


"Stress may cause one set of reactions in one woman, and something else in another, so ultimately the reasons behind how or why stress impacts fertility may also be very individual," says Pisarska, MD and co-director of Center for Reproductive Medicine at Cedars Sinai Medical Center.

In other words, there is no hard-and-fast rule about stress and infertility.

So when Akin states that stress shuts down fertilization as if that's the normal female reaction, he's not only being incredibly insensitive to rape survivors who become pregnant, but he's also doubling down on his scientific inaccuracy. You don’t say, “Guys, scientists are studying a link between ice cream and cancer. Therefore anyone who eats ice cream gets cancer.” Sorry, that’s not how it works.

I’m not sure how Akin managed to write a whole chapter in his new book about this incident and come to the conclusion that he was justified in his remarks. And I'm not sure how someone like him gets onto a science committee.

So SPLers: if you felt sympathetic to Akin after he apologized, has your opinion changed?
Posted by LN at 7:31 AM

Todd Akin is worried that women will lie about rape in order to procure an abortion.

If Akin hadn't been qualifying his pro-life opinion in the first place, this wouldn't have happened.

I've heard his name and this horrible statement mentioned six times this summer in D.C. Why are we all still talking about this mistake? Only the conservative mistakes continue arising two years later. We kill ourselves this way.

We're talking about it because he just published a book wherein he said he was sorry for apologizing for his ignorant and sexist statements. (Yes, the constant questioning in our society of whether rape victims -- and only rape victims, not victims of other crimes -- are lying is grossly sexist.) And because ignorance and sexism hurt the pro-life movement and should be fought.

I don't see how "actual" is any better than "legitimate" when the point is that rape survivors can definitely get pregnant due to rape.

Well, I was only minimally sympathetic to him at the time, but now even that is gone. Honestly, if this is what he's saying two years after the fact, when he's had plenty of time to think things over, I must conclude that he is simply an idiot.

This is why they go out of their way to talk to politicians who have to defend any number of varying issues and they don't like to interview pro-life apologists. Someone who has pro-life as their focus has taken the time to have thoughtful, kind, and scientifically accurate responses to the rape/incest/life-of-the-mother questions. Pro-life politicians generally don't have such answers (and they should because this is the type of question that they will all be consistently fielding). As much as he clearly botched that answer (in a clumsy attempt to sidestep whether or not abortion should be allowed for rape), there was really no winning: if he said "even in rape, abortion is wrong" he would have been a "monster"; if he had said "I believe in exceptions" he would have been just another inconsistent politician to much of the pro-life community.
I feel bad for him because he answered with the medical information he had as he understood it, even if it is at best questionable and hotly debated - and he was lambasted for it. And the "legitimate rape" thing was horrible, as much as I get what he meant, there was almost no worse way to say it than the way that he did. I think he STILL might not know how to properly explain what he was trying to get across in the first place (and should fix that before he talks about it again). So I do feel bad for him, but more so I feel bad for the entire pro-life movement which looks like a bunch of self-righteous idiots every time a politician screws up an answer like he did.
It all makes me think that pro-life apologists should start volunteering for pro-life political campaigns to teach them how to handle these questions in a sensitive, but clear and firm way.

My question is why is anyone even reading a book by Akin and how did he get a publisher to own it? He's like the hasbeen that neverwas. This is like Paris Hilton staging her comeback.

And how do you think Paris Hilton got famous? There's an abundance of idiotic fans for any idiotic celebrity out there.

He's had *two years* to look at the information and correct his response accordingly. And what does he do? Reiterate his ignorant response about stress and infertility. How could you feel bad for him?

Yeah, probably. I don’t think he realize /most/ survivors actually kept their kids while only less than 1 or 15 percent(s) of people chose abortion...

Absolutely. I mean do you have any old, conservative relatives or friends? I know some people that'll defend him to the end.

For the record, Todd Akin did not invent the idea that women rarely get pregnant from rape. Pro-life politicians before him have said the same thing, and made other questionable comments about rape (though it's not just politicians that oppose abortion who say stupid things about rape - see Michael Dukakis). And even today, some pro-life organizations still defend his claim:

I feel the same way. I get the whole "let's stop giving these morons more attention," but at the same time when we ignore this behavior, we're allowing it. And it's been going on for far too long.

As a mother of a rape victim that conceived and lives in Missouri & met with him. I'm furious and disgusted. I cannot believe I defended this man. I would love for him to sit and look our family in our eyes and explain his insane out of touch and completely wrong views to us! He has insulted our family and totally belittled what our daughter and every rape victim has gone through with his insensitive comments.

It's all about the almighty dollar. Controversy sells. If they think they can make money off of Akin, they'll publish his book.

How do you know that nobody here has ever made this mistake?