[Today's guest post by Nate Sheets in the first of a series. The next post in the series will arrive sometime next week.]

One pattern I often see online is that people shape their worldviews in black and white. It doesn't matter what the subject is: abortion, euthanasia, gay marriage, Dr. Who, the President, or pumpkin spice lattes--everyone seems to have an opinion, and that opinion seems to rarely declare: "there is grey area here!"

This is striking--at least in my mind--because at no other time have the majority of people (in the US) had virtually all of the wealth of human knowledge literally available at anytime, in virtually any place. We have the internet, with countless dissenting opinions and information, and yet we cling to our perspective with such clarity and confidence, often with little desire to dig into the thoughts of those whose opinions differ from ours. 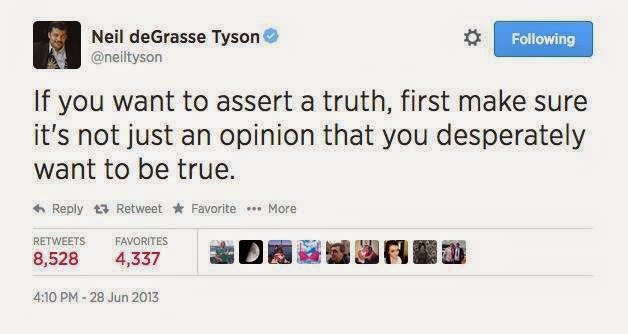 I have only recently begun to think critically using certain logical skills. While I have been an atheist for at least 5 years, and a pro-lifer since being a teenager, I only began to recently understand what it means to really think critically. What I found was a whole new world of perspective, leading me to fewer sure opinions, more "I-don't-know"s, and increased wonderment at the universe.

Over the next few weeks, I will be working out the concept of logical fallacies with all of you. I am by no means an expert in logic or critical thinking, but one thing is clear to me when I read any abortion-related article, blog post, or comment thread on the internet: people revel in their own logical fallacies. If you point it out to someone, they likely will not care, or they will change the subject. I used to react this way myself when my own logical fallacies were pointed out, because I was not familiar with the big-picture of logic and critical thinking, nor was I appreciative of them.

Assertions and Evidence
It is easier to assert without evidence than it is to assert with evidence. Because of this reality, we often employ logical fallacies to "enhance" our assertions. What ends up happening is that assertions are made that the other side can quite easily take down. So we scramble and move on to the next argument, or we try and enhance our position with another logical fallacy. (Sometimes we don't respond or we block people from our Facebook pages, because those things are easier to do than to abandon our original assertions.)

We need to make Arguments, not assertions.
The difference between an argument and an assertion is probably obvious: arguments give reasons for why we believe our position. Logical fallacies come into play here as well--our brains often justify our positions using seemingly-reasonable lines of thought. However, when closely examined, these lines of fault end up being fallacious, and we have to start again. Unless we're on the internet, in which case we're already 200 comments in and it's too late.

"Abortion is wrong."
This is an assertion. There is no argument, nor is there any evidence. In other words, it sucks.

"Abortion is wrong because God says so."
This is an argument with unacceptable evidence. There are many gods, many versions of his supposed writings, and many interpretations of those said writings. It is not a compelling argument.

"Abortion is wrong. Many biologists and doctors believe this."
This is an argument with a logical fallacy. Do you know which one? We'll talk about it in the coming posts!

I am writing these posts just as much for me as for those of you who are interested in critical thinking. Personally, I enjoy having my worldview, my beliefs, and my strategies challenged. This series of posts isn't meant to reach out to pro-choicers, nor to every pro-lifer. My hope is that when you encounter a bad argument on either side, you can identify it and (hopefully!) correct it in an effective way. My bigger hope, however, is that you begin to see these logical fallacies in yourself.

I invite other pro-lifers with more seasoned abilities to contact me with corrections, clarifications, or other thoughts you have. You can reach me by email at skepticalprolifer@gmail.com.
Posted by Unknown at 7:05 AM

So in your opinion, Afghani girls should have no say in how many pregnancies they bear? That this decision should be left to anyone but the girl?

Your argument fails. 70 percent of conceptions die naturally in abortion. If pro lifers believe that every conception is a "child" then men can choose not to have sex and end every abortion that could possibly happen. Their are 1.4 induced abortions and 10 natural abortions each second. By choosing to have sex, men cause all those deaths. If you want to end abortion, stop men from having sex.

not if it involves ending a human life.

i did not actively choose to be pregnant. my body BECAME pregnant, against my will. isn't that what you call slavery?

i'm pretty sure i just said that i do not agree with the treatment of women in Afghanistan.

You said that forced pregnancy is NOT slavery, that it is merely your body nurturing a new life.

Should Afghani girls be permitted to end their pregnancies? Or are they evil if they thwart nature by refusing to have 20 kids?

You chose to continue that pregnancy. You could have ended it. You didn't . You made a decision to keep your pregnancy. What about this is so hard to understand?

correct, pregnancy is not a form of enslavement. a woman's body can not enslave her. unfortunately, other humans can enslave her. in this case [in most cases], men essentially enslave women.


that's the difference. you blame the pregnancy for her enslavement, i blame the man for it.

So you do want women to be slaves to their biology. Because that's what happens if you take away choice.

Your posts have already been disputed. You call me an "evil psychopath" and place irrational unfounded judgements on me and at the same time launch personal attacks against me. The only evil I see is forcing your beliefs or anti-choice beliefs on women's reproductive health decisions.

Right. You believe that other people have the right to enslave women because of what women's bodies can do re pregnancy.

No. You are definitely pro slavery, if it involves forced pregnancy.

i don't believe pregnancy is enslavement, so how could i want to make women slaves to biology?
biology is not a slavemaster. i'm sorry that you believe it is.

i did not choose to become pregnant. my body became pregnant, AGAINST MY WILL. is my body a slave-master?

that implies i believe pregnancy is a form of slavery. which i don't. : )

It is if women can't make the choice to end their pregnancies.

And if you were forced to have 20 babies against your will, you would NOT consider that to be slavery, because pregnancy = natural.

You chose to continue to be pregnant. You could have had an abortion. You didn't.

when did i say other people have the right to enslave women? i specifically stated that the MAN is to blame for the woman's enslavement. you seek to reduce man's culpability by pointing fingers at pregnancy. once again, hideous misogyny.

Yes. So you side with the men who impregnatr 8 year old girls and force them to bear a child every year until they die

You side with antebellum slaveowners, who raped female slaves and forced them to bear children from puberty until death.

You side with people who treat women like cows.

Apparently she carried an unwanted pregnancy, so it's her desire to force other women to do the same thing.

She reminds me of Faye.

You believe that afghan girls should have absolutely NO say in how many children they bear.

You are pro slavery.

I think so, yes. What I'm confused by is her denial that she made a choice to continue her pregnancy.

You certainly don't talk about your pregnancy in a positive manner. In fact everything you've said, that it was unwanted, against your will, is negative. And you seem to have a desire to force other women to be as miserable as you were.

Abortion is the choice for someone who no longer wants to be pregnant, for whatever reason. It's not up too you to judge the reasons.

She reminds me of a very confused young woman who came to accuse everyone on TFA of being heartless baby killers. This woman let us know that she found us to be profoundly evil, and that she could never kill her unborn babby...

Then she told us about the time she had a pregnancy scare and how she prayed and prayed that she would miscarry, and then she did, and she was *so* happy that her precious unborn babby had miscarried, because she really didn't want to be pregnant.

And if you read through here, there are numerous women who 1) procured an abortion 2) yelled at the abortioneers whilst getting the abortion, accusing them of being heartless murderers

pregnancy was miserable. the results, more beautiful than you could imagine. : )

i do believe they should have a say, who told you differently?

i didn't chose to BECOME pregnant. whose fault is it that my body became pregnant?

really? i am the one who blames the MAN for forcing sex on a woman. you, on the other hand, prefer to blame a woman's body. shameful.

You believe that they should not have the right to an abortion. Which means that you believe in gestational slavery.

And you believe that the man has the right to force her to remain pregnant against her will.

that's YOUR belief. not mine. i don't believe a woman's body enslaves her.

Why would you be appalled? 20 babies in 20 years= natural functioning of your female organs.

uhhhh, considering the fact that i don't plan on getting pregnant again for quite some time....yeah....i like to think i have a choice in whether or not i get knocked up.
thanks for inquiring.

i didn't choose to GET pregnant. it was not my decision to become pregnant. are. you, following. now. ? read twice if you must.

but what you believe is based in the perverse and patriarchal idea that a woman's body is a tool of enslavement.

says the person who desperately wants to convince me that the female body is a means of enslavement. : )

Yeah. So you should not be appalled if raped and forced to have babies until you die. This is natural!

haha, that presumption would only work if man had control over whether or not a woman's body gestates. he doesn't. the uterus and such handles all that.


sorry if the word 'uterus' made you wince. i promise it won't try to enslave you.

Preventing you from getting an abortion = control

What if a man wants a woman to continue her pregnancy but she wants to have an abortion?

Gestation is enslavement if the woman does not want to gestate. Get it?

I really this is some sort of projection with her. She doesn't say anything about 'life' or 'babies', she's just pissed that she got trapped with one and she'll be damned if anyone else goes free. It's all about her.

we've been over this. i don't believe a woman's body is EVER a form of enslavement.

a man can want whatever he wants. his desires have no affect on a woman's ability to gestate.

You are wrong about that, sweetie.
http://definitions.uslegal.com/f/forced-pregnancy/

Your belief is not every woman's belief. Your choice will not be and should not be every woman's choice. Other women's pregnancies are not all about you, Mariel. And unless you can carry it for them, you don't get to decide. Deal with it.