We recently received an email from a student who is working on a paper about abortion and religion and had some questions for us. Although the final question reveals that the student probably isn't all that interested in what we have to say, we answered anyway for the sake of being helpful. The Q & A may also be of benefit to you, so we are reprinting it here. Please feel free to use this exchange as a framework for your own conversations.

1) What can you tell us about your organization?
Secular Pro-Life is a non-religious pro-life group with a focus on educational outreach.

2) Does your organization focus on religion? If so, which religion?
As the name implies, Secular Pro-Life is secular. Our officers are atheists and agnostics, but we welcome religious allies as regular members.

3) Do you feel that religious views have impacted your organizations stance on abortion?
No.

4) Under the circumstances that a women were raped and impregnated, does your organization still feel that abortion would be the wrong choice for her if she felt adoption were not an option?
SPL does not require members to take a stance on the rape exception but we encourage debate. You can read more here.

5) If the life of an unborn child and mother were endangered, does your organization feel that abortion is still not an appropriate choice?
SPL, like most pro-life organizations, recognizes that abortion to save a mother's life is tragic. Women in that situation do not view it as a "choice." It is better to save the life of the mother than to lose both mother and child.

6) Does your organization believe that abortion is wrong in all cases or is abortion acceptable in only some cases? If so, in which cases is it okay to have an abortion?
See above.

8) What advice can your organization give a woman if she became pregnant with an unwanted pregnancy?
The pro-life movement must, and does, provide practical support to women in crisis pregnancies. SPL compiles resources at http://www.secularprolife.org/#!links/c19od. In addition, we focus on sex education to prevent unwanted pregnancies in the first place.

9) In many cases, children who have been exposed to adoption and/or foster care have been mistreated or malnourished. Does your organization believe that adoption over abortion is a better state for unwanted pregnancies?
Child abuse sadly occurs both in biological homes and adoptive homes. The solution is not to end the lives of its potential victims, but to rigorously prosecute child abusers whatever the setting. Adoption is not right for everyone, and no woman should ever be pressured into an adoption placement-- but done right, adoption can be a great solution for all parties and that option should remain on the table.

10) Lastly, if abortion were again declared illegal, is it safe to say that your organization would be okay with the millions of women who would risk their lives in back alley abortions? Or the thousands of babies who may be tossed away in garbage bags due to unwanted pregnancies they were not allowed to terminate?
In 1972, the year before Roe v. Wade made abortion legal nationwide, the CDC reports that 39 women died in illegal abortions and another 24 died in legal abortions (a handful of states legalized abortion before Roe). The myth that tens of thousands of women died in illegal abortions quickly falls apart when you examine the evidence (see below graph from the National Center for Health Statistics). To see thousands of maternal deaths from illegal abortion, you have to go way back to the years before the invention of antibiotics, when all surgical procedures were extremely dangerous. 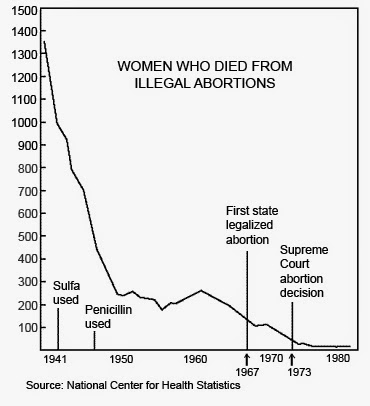 I also have seen no reliable evidence of "thousands of babies tossed in garbage bags," but it's worth mentioning that Safe Haven laws have been passed since Roe v. Wade. These laws allow women to drop off unwanted infants at hospitals, police stations, and similar facilities with no questions asked.

Finally, I direct you to a key SPL article on the subject: "Back-Alley" Argument Disrespects Women's Intelligence.
Posted by secularprolife.org at 7:20 AM