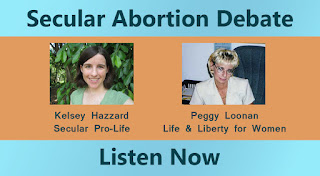 On Thursday night, yours truly (Secular Pro-Life president Kelsey Hazzard) had the privilege of appearing on the HEAL Report, a social justice podcast, to debate abortion. My debate opponent was Peggy Loonan, a longtime Coloradoan pro-choice activist who runs a group called Life and Liberty for Women.

There are a million abortion debates out there, and this one is over an hour, so why pick this one to listen to? First, because this is a completely secular debate. In the entire program, the only mention of religion came from Loonan, who said something in passing about women making choices in accordance with their moral and religious beliefs. I still don't know if Loonan holds any religious beliefs, and if so, what they are. Very refreshing.

And second, you should listen because Loonan and I make for an interesting pair. The HEAL Report did a great job recruiting the two of us. We come from different generations and have different personalities, which come through very clearly. And obviously we have very different beliefs about abortion. But we also have some things in common. At one point Loonan mentioned that she left NARAL over strategy disagreements and that she views herself as a black sheep of the pro-choice movement. I told her I know the feeling! We all got a nice laugh out of that.

I haven't had the chance to re-listen to the debate, but my recollections are still pretty fresh.

Loonan's presentation consisted chiefly of anecdotes about women having back-alley abortions, often read verbatim from pro-choice books. I presented CDC data showing that maternal deaths from illegal abortion plummeted before Roe v. Wade, pointed out that women continue to die in legal abortions, and highlighted Chile as an example of how we can achieve positive health and social outcomes for women without sacrificing the right to life.

I stand by the accuracy of what I said, but Loonan had me beat on pathos. I should have been ready to tell the tragic stories of Tonya Reaves, Lakisha Wilson, Jennifer Morbelli, Maria Santiago, and so many others. People are usually moved more by stories than by statistics. I did tell the story of Heather, whose son was saved by a sidewalk counselor. But I could, and should, have done more.

In my column: I raised the conjoined twin analogy and Loonan had no good response. I also found her argument about viability unconvincing. Both of those weak points came up at times when Loonan was deviating from her prepared comments, which she didn't seem used to. I felt pretty comfortable throughout the debate.

I hope you enjoy the debate! If any moments stand out to you, please comment with the timestamp.
Posted by secularprolife.org at 6:51 AM