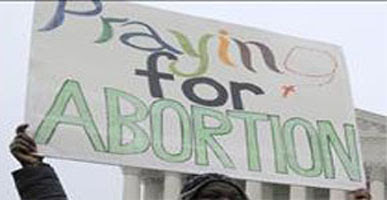 The first claim is that society should protect innocent human life that is unable to protect itself. The term “innocent,” originally used by various popes, refers to fetal life which has committed no sin. Yet the Roman Catholic Church has proclaimed only one person, Mary, the Mother of Jesus, as having an immaculate conception and hence free from original sin. In any event, public policy cannot be founded on theological claims to innocence. There is another meaning of “innocence” which comes from two Latin words, in (not) and nocere (to harm), and therefore means “not harmful or dangerous.” However, it is precisely the fact that some pregnant women (and their physicians) view the fetus as harmful or threatening to their health or welfare and hence leads them to consider abortion.

How about the common-sense definition of having not done anything wrong? Jesus Christ... I mean, gosh golly gee.

In all seriousness, religious justifications for the destruction of human life are terrible. And they come up quite often the abortion movement. Swomley is hardly the only culprit. We've also seen animist, Buddhist, and other Christian beliefs twisted to support homicide.

I grew up in the Methodist church. To his credit, my childhood pastor never preached abortion. But he never spoke out against the official Methodist position, either, whatever his personal disagreements with it may have been. In any event, the Methodist failure to stick up for the innocent made it a lot easier for me to leave.

P.S.: Swoley's quote was first brought to pro-lifers' attention by Sarah Terzo of Clinic Quotes and Live Action News, who happens to be an atheist and a long-time supporter of SPL. Go Sarah!
Posted by secularprolife.org at 7:38 AM