Face it, abortion advoates: Pro-choice is not pro-life

As we draw closer to another presidential election, and amid a new Gallup poll indicating a decline in American’s who consider themselves pro-life, the so called “abortion war” is heating up. The pro-choice side has taken to social media, and opinion columns responding to the nations tightening restrictions on abortion, by claiming that being pro-choice is in fact pro-life and pro-life is actually pro-death. Huh?

Well, let’s look at it a bit closer. In a recent opinion article penned by Mary Elizabeth Williams for Salon, titled “Face it, anti-abortion advocates: Pro-choice is pro-life,” the author chronicles the story of Buzzfeed contributor Paola Dragnic’s abortion. Paola’s story is complicated, and tragic, and takes place in Chile, a country where abortion is illegal. In her case, her unborn child was found to have severe life-threatening chromosomal disorder that also threatened Dragnic’s life. Williams’ retelling of the story slams pro-lifers as, of course, willing to sacrifice the mother for the dying embryo or fetus, and goes further to suggest that this is the ideal that the American pro-life position strives for: an all-out ban on abortions regardless of the circumstances.

There have been other notable women who have come forward with abortion stories that are easy to sympathize with. Wendy Davis, for example, the unofficial poster woman for the pro-choice position, wrote about her "two abortions" in her memoir “Forgetting to be Afraid”. In the memoir she describes her first abortion as an ectopic pregnancy (although an ectopic pregnancy is not generally considered to be an abortion, unless you are a pro-choicer trying to make the case that, ehem, pro-choice is pro-life) and the second due to a severe fetal brain abnormality. Now we can disagree about the level of justification for each of these scenarios, but is that really the point? I don't think so.

The point of these stories is to help the public sympathize with those situations where abortion is, or seems to be the more moral approach. How many times have you heard the heartbreaking story of Savita Halappanavar, the young woman in Ireland who was denied an abortion, and died of septicemia when doctors failed to prescribe timely antibiotics? This extremely rare and devastating example has been a primary focus for pro-choice advocates since its occurrence in 2012, and continues to be used as a tool for misleading the public into the idea that ultra strict right-to-life policies that allowed such a tragedy to occur, are what pro-lifers want and what pro-choicers exclusively fight against. 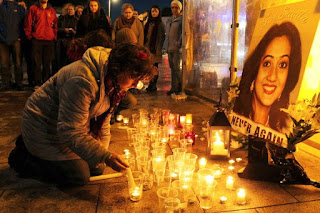 A woman mourning the death of Savita Halappanavar

But this is a complete misrepresentation of both the pro-life position, and the reality of the abortion industry in America. This opinion refuses to acknowledge that according to Gallup, the vast majority of pro-lifers in America support a women’s right to an abortion to save her life. And whether or not you personally support the rape exception, the majority of those who identify as pro-life, do. It’s absurd to suggest that American pro-lifers by and large would support an all-out ban on all abortions, regardless of the special circumstances involved.

Choosing to highlight these rare, nuanced, and tragic stories of developing humans sacrificed for the sake of the mother’s life completely turns a blind eye to the approximately 55,214,295 abortions since Roe v. Wade, the overwhelming majority induced for purely elective reasons. It totally ignores the human beings that are brutally poisoned or dismembered in the womb, by the millions, for reasons that the majority of pro-lifers feel are beyond justification, and yet are supported 100% by the pro-choice platform. So, I have to say to Ms. Williams, nice try but no, not even close. Pro-abortion is not pro-life, no matter how badly you want it to be. #sorrynotsorry