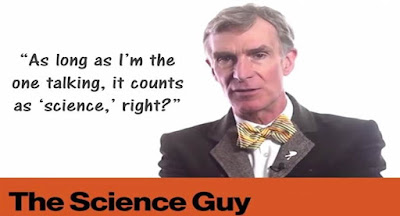 NARAL Pro-Choice America posted a video featuring Bill Nye giving his views on abortion. Throughout the roughly four and a half minutes, Nye says pro-lifers have a “deep scientific lack of understanding” and hold positions “based on bad science.” He thinks we anti-abortion folk “apparently literally don’t know what you’re talking about” (as opposed to figuratively not knowing..? Not sure.)

We’d hope, then, that Nye would go on to explain exactly what scientific misunderstanding pro-lifers have, but sadly the video contains almost no science whatever. Instead Nye goes on about “men of European descent” (No, not really accurate) passing ignorant laws based on their “interpretation of a book written 5,000 years ago” (such a strawman) that apparently makes them think “when a man and a woman have sexual intercourse they always have a baby” (is that a joke?). He graciously informs us that, in fact, women don’t get pregnant literally every time they have sex. It’s a good thing we have famous scientists to explain that to us plebians.


It’s hard to understand how this distasteful mix of elitism and non sequiturs is supposed to relate to political positions on abortion. It seems like Nye is suggesting that pro-lifers and scientists are mutually exclusive groups (once again, off-base), that pro-lifers should be grateful to scientists for unraveling some of the mysteries of biology, and that pro-lifers are incapable of understanding the process of human reproduction beyond fertilization. In fact there seems to be this weird overtone hinting that science is inherently pro-choice and so pro-lifers have no right to discuss the scientific backing for our position.

These implications are especially rich considering Nye never does get around to explaining how the pro-life position is unscientific. The closest he comes is when he points out that many fertilized eggs don’t implant:

“Many many many more hundreds of eggs are fertilized than become humans. Eggs get fertilized—by that I mean sperm get accepted by ova—a lot. But that’s not all you need. You have to attach to the uterine wall, the inside of a womb.”

But the people making this equivocation are the ones misunderstanding biology. As organisms, every one of us began as a zygote, and that means every one of us had a biological beginning that preceded the moment we implanted in our mother’s womb. Nye doesn’t explain how it’s “bad science” to acknowledge that reality. (Actually, I’m not sure whether Nye understands that’s what pro-lifers are saying. If Nye is aware of anything more than some pro-choice caricature of an actual pro-life position, he doesn’t show it.)

Note that even if implantation, rather than fertilization, were the defining moment of new human life, it wouldn't change the abortion debate very much. Abortions typically happen weeks or months after implantation. So even if Nye's comments had provided new, insightful information, they don't come close to demonstrating that an anti-abortion position must be based on "bad science."

Meanwhile, it’s true that if zygotes don’t implant they will die and not develop into fetuses. It’s also true that if fetuses get tangled in their umbilical cords they may be stillborn and not develop into infants. And infants with congenital heart defects may die and not develop into toddlers. And really any of us at any life stage could suffer a natural death and not develop into the next life stage. How does that fact imply that zygotes aren’t humans, much less that abortion is justified? Unfortunately, Nye is too busy venting his frustration at our ignorance to explain the relevance of his rambling. Or maybe he believes that as long as nature kills us, it’s okay if we kill each other. I mean tsunamis kill thousands of people, and that’s why we’re fine with genocide, right guys? Right?…No? Yeah, I guess that makes no sense at all.

The truth is science tells us the fetus is an organism and a member of our species (and it is a “deep scientific lack of understanding” to suggest otherwise). But science is descriptive, not prescriptive. Through genetics we know each of us inherits a mixture of our parents’ DNA; through embryology we know that our hearts begin to beat about three weeks after fertilization; through ultrasound and magnetic resonance technology we can watch the embryo's movements, which provide sensory input that spurs brain development; and yet this wealth of information can't indicate whether or why we should care.

Science can’t tell us what to value in human beings or when we should protect one another. Those questions fall within the realm of philosophy, a realm Nye steps squarely into when he implies a value judgement based on how easily organisms can naturally die. His implication isn’t a scientific fact, it’s a philosophical position, and Nye’s famous nickname doesn’t give him the right to conflate those two completely different approaches. It’s especially loathsome that this hand-wavy philosophical viewpoint is trying to be passed off as “science” by one of our country’s biggest science advocates. That’s not okay no matter how quirky his bowtie is.
Posted by M at 2:40 PM