#PinkOut for Planned Parenthood? We have a better idea.

Planned Parenthood is asking its supporters to "turn the internet pink" today, using the hashtags #PinkOut and #StandWithPP. This, of course, is in response to the #PPsellsbabyparts scandal and subsequent efforts to redirect Planned Parenthood's government funding to more deserving women's health providers.

I can't think of a better illustration of the shallowness of the pro-choice lobby. The pro-life movement sets forth legitimate concerns about organ sales and other unethical practices—including altering the abortion procedure in the interest of getting more intact organs, rather than in the interest of the woman's health—and they respond with "Ooo, look! PINK! Pink is pretty! Pink means we care about women!"

So we've created a meme to set the record straight: 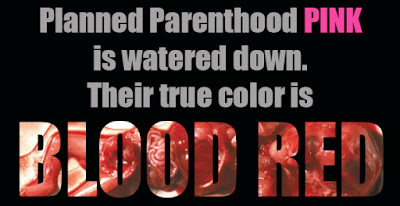 We rarely use photos of abortion victims, but sometimes it is called for, and it's certainly an effective way to cut through the cutesy pink nonsense. The victim pictured here was killed when he or she was 10 weeks old, according to the Center for Bioethical Reform.