Why did you convert to the pro-life side?

If we want to change hearts and minds regarding abortion, it's helpful to know what's converted people in the past. Recently we asked our Facebook followers, "Did you or someone you're close to go from being pro-choice to pro-life? If so, what changed your mind?"

We got some amazing answers, and there were definitely some consistent themes: learning more about fetal development, learning about the effects of abortion, and having good relationships with pro-lifers. But by far the most common reason people cited for converting to the pro-life position was experiencing their own (or their partners') pregnancies.

Below are a sampling of the answers we got, but you can see the full extent of them here.

Leon V. – An embryology class. It was so obvious.

Laurie L. – I was pro-choice until I saw the fully formed fetuses at the Our Body exhibit at the museum. I was awed at how early they looked human. These were not balls of cells. I was instantly converted.

Reth S. - The first case I had as an intern in the delivery room was a stillborn. I saw his parents crying and that was all I needed to see to understand the humanity of a child.

Gisele T. - I was pro-choice. Science and philosophy changed my life.

Buster A. – Science. Also, a few friends got pregnant and I saw the coercion they were put through to kill their boys.

Stephanie R. – Being pro-choice is the standard over here [in Australia]. It’s just assumed if you have a pregnancy at the wrong time you simply terminate it. It was that kind of attitude that led me to having abortions myself, including one I didn't even think twice about because it was just so easy and acceptable. I think as soon as I was presented with a case against abortion, and I actually had to think about it, I started asking questions and I started changing my mind.

Pro-choice rhetoric started to seem like all lies, manipulations, and false information. It contradicted my own deeply held beliefs about being responsible for our choices, not initiating violence, and ending discrimination. I couldn't reconcile being warm-hearted towards every other member of the human species but going hard and cold when it came to the weakest and most vulnerable.

Lauren E. - I drank the Kool Aid indoctrination of "it’s none of my business what someone else does with her body." Then I came home from a date to find my lifeless roommate's body in the living room, having attempted suicide on her baby's 8th "death day." Suddenly her body became my business, like it or not. She lived. I have since met many more victims.

If abortion clinics had to pay for post-trauma care (surgical reconstruction, psychiatry/psychology, relationship therapy, and parenting skills), they'd be out of money in 90 days. The industry is only lucrative if they end lives at $600 for every 20-minute procedure and leave the collateral damage and death to the rest of us. NARAL loves to delete this testimony, because it's an inconvenient truth. Another's life and body is your business.

Once your eyes are opened, there's no turning back.

Roni C. - The humility of certain Pro-Lifers in the face of name-calling (even from myself) and their consistency in debate (for example, maintaining a central point no matter how much pro-choicers jumped around), and the fact that I was not treated like a monster for being pro-abortion-choice (even on the radical end) all played a huge role in my conversion--one that cannot be appreciated enough, among other things.

Evan L. – I dated a wonderful girl years ago who was conceived through rape. Her biological mother strongly considered aborting her, but in the end decided not to. She grew up in orphanages and was later adopted and eventually learned of her past (and met her biological mother). I suspect that I'd always been secretly “consistently pro-life,” but when I learned that the woman who had impacted my life in such a wonderful way was very nearly put to death because of who her father was and the circumstances behind her conception, it made me feel like I was going to vomit. I realized then and there that abortion isn't politically “progressive” at all, and that I would have to accept the responsibility of holding a political view that was going to be unpopular in my particular social circle (very far to the Left). Rape is a horrible thing, to be sure; rape plus abortion is even more horrible.

Lindsey W. – When an acquaintance from school showed me a picture of her son she had given up for adoption after being pregnant at 15, I realized this was a baby and that he might not have existed if my friend had decided to have an abortion. She had been interested in getting one and I said nothing to stop her (her body, her choice right?). I realized that if I would defend his life as an infant, I couldn't sit back when he was a baby still growing in the womb. It also showed me that adoption is a realistic and practical option, even for a teen. This friend was so happy she had chosen life, despite the despair and fear she initially experienced.

Michelle R. – When abortion is discussed in the textbooks, it's illustrated as a debate where angry people go hold up signs and neither side is right or wrong. Kind of feels like a waste of time and something that doesn't affect us at all.

I was brought up by pro-choice parents. I feared overpopulation and blamed poverty, deforestation, extinction, and war on unplanned children. My dad told me that abortion was a responsible act. "If I ever got pregnant," I told myself, "those religious nuts would not help me stay in school,"

Afterward. I fell in love with a pro-lifer, and while I was pregnant with his child many people strongly encouraged me to abort, including my parents. This is when I became personally pro-life, politically pro-choice.

A year after that Myspace died and I made a Facebook account. I was browsing pages and came across NARAL Pro-Choice America and Let's find 1,000,000 people against Abortion. At the time NARAL had forums and when I commented on there they made a mockery of my grammar and parenting status. The posts by the page were nothing but hate towards the other side, and there was way more glamorization of abortion than what I was comfortable with.

On the pro-life page, however, they posted and argued from a scientific point of view, they shared stories of women who conquered mountains, and they encouraged pro-lifers to donate their time, money, and supplies to parents in need and post-abortive women. When I talked to the admin and other people that follow the page, even though they knew I wasn't full on pro-life they were very respectful and actually believed in me (graduating high school with a child).

I was a new parent and I wanted to make the world a better place for her. Guess what side is actually getting stuff done?

Elizabeth D. – I went from being pro-life with exceptions for disability and rape (so essentially still pro-choice) to pro-life with no exceptions. My mind was changed when I lost my second son at 16 weeks gestation. I delivered him and held him and looked at his perfectly formed body including fingernails. He was a beautiful baby even if the doctors said he would have been born with disabilities. Babies like him deserve a chance at life.

Sabri B. – I used to be pro-choice. When my husband and I were trying very hard to conceive, abortion began to feel wrong to me. Why would someone want to kill an unborn baby, while others longed for one so badly? Then I finally got pregnant. As my pregnancy advanced and I began feeling my baby and learning about her intrauterine development, I became more and more pro-life. Fetuses are definitely not masses of cells! My baby is now 17 months old, and she's the love of our lives. I just can't understand how someone can even think of abortion as "liberating" and "empowering." It sounds inhuman and bizarre at the same time.

Kristen R. – I think it was when I thought I was pregnant. I was already leaning towards being pro-life, but this really hit home. Now I have a baby (8 years later, after difficulty) and it has only reaffirmed my feelings. I heard my baby's heartbeat at that first appointment and couldn't conceive of how anyone could think that this baby was not a person. I felt her move before 20 weeks. It hurts my heart that anyone could think that child was okay to kill.

Candice N. – My mother was a teen in the 70's and pro-choice. She believed the medical professionals who claimed that the unborn child was only tissue. Why wouldn't anyone believe a doctor? Then in '81, she was pregnant with her first child, my older brother. She received a pamphlet from the OB on fetal development. It was then that she discovered that the unborn child's heart was beating long before she found out she was expecting. The living baby was unique and distinct from the beginning. Since then, she has been staunchly pro-life. I'm so thankful too! I became pregnant at 16 and if it wasn't for her showing me images since I was child of the living unborn child, I might have aborted my first baby—who is now 15!

Jeff S. – It happened for me when I heard my son's heartbeat for the first time when my wife was pregnant. A few years later my wife had an ectopic miscarriage that almost killed her. She was ten weeks. It really hit home when we had to fill out a death certificate. Years still after that, when our son was 13, we found out my wife was pregnant again. It was very unexpected, but our second son has been the thrill of a lifetime.

Gina P. – Miscarriage prior to my son and threatened miscarriage with both my son and my daughter. I saw them on ultrasound at 6-7 weeks; their hearts were beating.

Susan T. – Seeing my baby's heartbeat on a sonogram at 10 weeks changed my mind. I had always believed magazine articles that described fetuses as a "clump of cells." The more I learned about fetal development the more I realized these were tiny lives and abortion is ending that young life.

Lesli L. – I did when I became pregnant. I realized I was ignorant about fetal development and ignorant to believe the lies. I heard my son's heartbeat at 6 weeks and was forever changed.

Angela S. – Like so many other people here, I had an unplanned pregnancy. I had only been dating my boyfriend for 6 months. I was in college and barely made any money. When my test came back positive, the first thought was “I have a baby inside me. Not a clump of cells or some non-sentient being.” Up until that moment I didn't care about abortion; it was none of my business. In that moment, however, abortion was the furthest thing from my mind. This was our first picture of our first daughter. The fortune was from dinner that same evening. I kept it like this on our fridge the whole pregnancy. It was hard having a child the way we did, but, man, she is worth it. 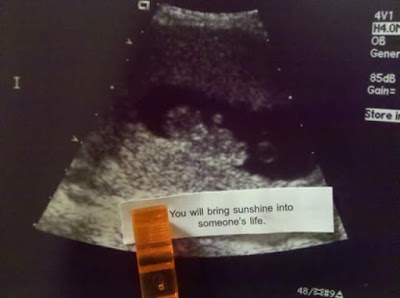