2015 was an amazing year for Secular Pro-Life! Here are just a few of the highlights: 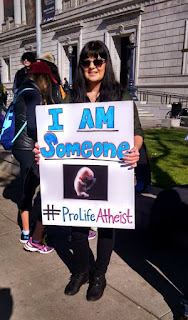 January: Secular Pro-Life once again attended the March for Life in D.C., the Walk for Life in San Francisco, and the Students for Life of America conferences in both cities. We provided campus leaders from dozens of schools with free secular outreach materials to distribute at their schools. Also, the pro-life documentary film 40, which features Secular Pro-Life prominently, had its TV debut.

February: SPL president Kelsey Hazzard spoke at the annual conference of the American Association of Pro-Life Ob/Gyns (AAPLOG), promoting SPL's Prevent Preterm project. We also kicked off our Website Under Deconstruction blog series, calling out abortion businesses across the country for lies and omissions on their websites.

March: Website Under Deconstruction continued. We analyzed "the abortion religion." We made the case for a trans-inclusive pro-life movement. And 40 was broadcast in Spanish.

April: We said goodbye to AbortionSafety.com, our site warning women about abortion businesses with a history of malpractice, health code violations, etc. Don't worry; the site isn't gone! We transferred it to Online for Life, an organization that specializes in reaching abortion-minded women through Google searches. It was a perfect fit and we're excited to see the site's reach grow under OFL's care.

May: We taught pro-life students in Texas about the secular approach. Where Hope Grows came to theaters. And the House voted to ban abortions after 20 weeks.

June: We launched Prevent Preterm, an educational campaign focused on preventable risk factors for premature birth—including abortion. Hazzard and abortion advocate Peggy Noonan went head-to-head in a debate podcast. And when the Supreme Court ruled in favor of marriage equality, we were the first to offer an in-depth analysis of what Kennedy's majority opinion could mean for the future of the right to life.

September: We celebrated the 39th anniversary of the Hyde Amendment, the federal policy that refuses to subsidize abortion through the Medicaid program and has saved the lives of over a million Medicaid kids. Already, we'd spent several months making big plans for the 40th anniversary on September 30, 2016. (You will hear a lot about this in the coming year.)

October: For the third straight year, Hazzard addressed the pro-life student leaders of New England at the Life and Truth conference at Yale. We debunked the claim that "nobody likes abortion." And just for the heck of it, we released a satirical video inspired by Willy Wonka and the Chocolate Factory.

November: We marked Prematurity Awareness Month with a renewed focus on Prevent Preterm, including an extended facebook advertising campaign. But the month ended on a tragic note, when Robert Lewis Dear killed three people and wounded several others at a Colorado Springs abortion center.

December: Our facebook page hit 10,000 likes. We continue to work on our Hyde Amendment project. And of course, we're getting ready for the 2016 March for Life, Walk for Life, and SFLA conferences—just a few weeks away! We hope to see you there.

Thank you so much for your support in 2015. Everything we do, we do on a modest budget with no office and no paid staff. Our overhead costs are minimal. When you donate to Secular Pro-Life, your gift counts in a big way! Please consider donating to make 2016 our best year yet. We appreciate your generosity.