WSB-TV of Atlanta did what I wish more media outlets would do: it surveyed the health records of its local abortion centers and completely demolished the pro-choice narrative of poor bullied women's health providers versus unnecessary anti-choice regulations. You need to watch this. The report opens:


Unsterilized instruments, dirty linens, and expired medications: just some of the findings after we combed through five years of state inspections at Georgia's abortion clinics.

Incredibly, they got a Planned Parenthood representative to agree on camera that inspections are a matter of women's safety, not politics. But the inspections don't paint a pretty picture. The violations are even more egregious than the introduction implies; some medications were expired by more than ten years, and important equipment was repaired with duct tape and cardboard.

And if Planned Parenthood officials thought that they would get friendlier coverage in exchange for the PP representative's appearance on the program, they were sorely mistaken. The report is not subtle about Planned Parenthood's record. ($1,400 refers to the fine.) 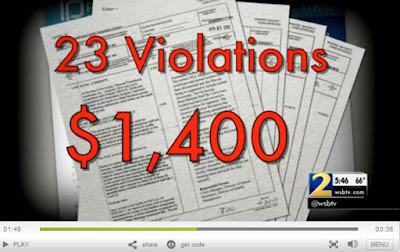 A state health official explained that abortion centers are to be inspected "periodically," which in her view means every two to three years, but that there's "no set rule." The inspection agency only has about 100 inspectors responsible for 15,000 facilities, including the state's five abortion businesses.

My jaw just about dropped with this exchange:


Reporter: Do you feel like the state is doing everything that it can to protect women at these clinics?
Planned Parenthood spokesperson: I think there is probably more they could be doing.

After which Planned Parenthood turned right around and blamed inspectors who "have biases against abortion care."