Your president, Kelsey Hazzard, here. As you know, I'm speaking at the Students for Life of America conferences next month! The topic is improving the diversity of student pro-life organizations. Obviously, my angle is religious inclusion. My lovely co-presenter, Christina Bennett, will speak to race. 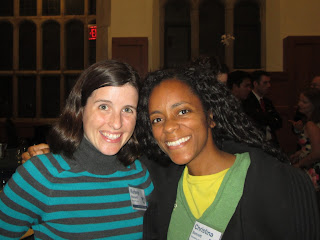 We met at the Yale conference in October and hit it off immediately. We decided that we want to do something more engaging than the standard one of us talks, then the other talks. We hit on a brilliant idea: since I'm a White "none" and she's a Black Christian, we're going to put on an exaggerated what-not-to-say skit. I'll be playing the role of the condescending White person ("Did you know that Margaret Sanger was a racist? Huh? Did'ja know that?") and Christina will be playing the role of the obnoxious Christian ("So, like, how are atheists moral? Why don't you just go around raping people all the time?").

We're going to hammer out the details soon. What annoying pro-life conversations have you experienced? Share your pet peeves in the comments, and your bad dialogue could wind up in our script!

Posted by secularprolife.org at 7:15 AM