What creates babies: sex, or choices?

[Today's guest post is by Sean Cahill, a recent graduate of the University of Arizona College of Law. She says: "Because it changes the way my voice is heard when it comes to life issues, I feel compelled to state that I'm a woman, despite what my name suggests."] 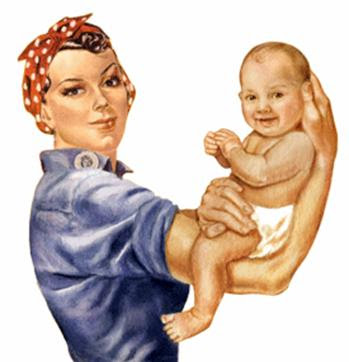 The idea that childcare is primarily or entirely the mother’s responsibility runs so deep that many on both sides of the abortion debate view it as an unwavering constant we must accept. Pro-lifers claim that childcare and child-rearing need to be more valued so women won’t feel they “need” an abortion, which of course is not untrue (a thoughtful conversation exemplifying this principle appears in the comments here). Pro-choicers believe that because childcare is indeed “women’s work,” women who do not want to be wholly responsible for caring for the children they bear need abortion. For example, in arguing that abortion regulations violate the Equal Protection Clause, law professor Reva Siegel writes:


Because abortion-restrictive regulation coerces women to perform the work of mother-hood without altering the conditions that continue to make such work a principal cause of their subordinate social status, it is a form of status-reinforcing state action that offends constitutional guarantees of equal protection.

Instead of daring to insist that men share equally in child-rearing, we submit to the sexist notion that a child is a mother’s responsibility opposed to a parent’s responsibility.

While abortion advocates claim abortion is necessary to address the inequality present in the realm of child-rearing, in actuality it hinders and may even foreclose efforts to alter these societal conditions, making abortion a barrier to sex equality instead of a tool to achieve it. A woman gets to decide if a child is born, and then as many say, she must raise that child because after all it was her choice. Her body, her choice becomes her problem. The availability of abortion does not free women from the “burden” of motherhood, but ensures that pregnancy and childcare continue to be viewed as entirely women’s issues, as opposed to human ones.

Faced with the fact that child-rearing was viewed as entirely the responsibility of mothers, and thus a frequent barrier to educational and career goals, some women chose to deny the scientific reality that at conception, a new human individual exists with a unique DNA sequence different from any before. Instead of facing outward and scorning any person that would dare ask us to change this, we looked inward. Instead of changing society, we begged for the “right” to change ourselves. We began to claim conception should be unrelated to whether an infant is born nine months later. Because fatherhood was voluntary, motherhood should be too. And now we are told individuals have a right to sexual pleasure regardless of their procreative plans. (For examples look here, here, or here.) A woman consents to sex, not pregnancy, and definitely not parenthood. Anyone who believes otherwise is derided as a "slave to biology," as if biology were deliberately trying to oppress us (and not, you know, keeping us all alive). No longer will mere biology determine our fate! All women will have the right to the outcome we desire from any sexual experience. Conception does not necessarily create a child you must parent; instead, a woman’s choice creates that child.

We espouse this sexual freedom, this disconnect from sex and the possibility of creating a child, and still expect men to “step up and take responsibility.” A man must be prepared to accept the responsibilities of parenthood whenever he has sex because abortion is a woman’s right. We expect these men to take responsibility... but responsibility for what, exactly? If sex doesn’t make a baby, if sex is not consent to a pregnancy or parenting, then why should men feel responsible for the child that results from the unilateral choice his partner makes? This is a question many men have asked, even going so far as arguing for a right to a “financial abortion,” a right to sign away any parental rights or obligations, including child support, before birth. (For examples, look here, here, and here.)

Instead of saying at the moment a pregnancy is discovered: “You are both parents, now be parents; your unique distinct child(ren) exists,” society decided the better conversation would be: “You could be parents in nine months, a child could come into existence, now let her decide.” We expect the sex that is pre-disposed to walk away because of their biological disconnect to conception, the sex whose irresponsibility is one of the very reasons women fought for the right to abortion in the first place, to welcome a child he had no say in, with open arms, love that child and financially support that child. Sadly but not necessarily surprising, in2014, 1 in 4 children under the age of 18 — a total of about 17.4 million — were being raised without a father and nearly half (45%) lived below the poverty line.  80% of all single parents are mothers opposed to fathers.

Abortion was not a step forward for women, children or society. It ensured that pregnancy and child-rearing would be cemented as women’s issues. As Jo McGowan Chopra states:


We are still dealing on their terms. We are still accepting the idea that pregnancy and birth are women’s problems to be dealt with by women – and abortion makes things easier. With abortion readily available, the community need not feel any particular responsibility… the woman has taken care of her little “problem” and everyone can breathe a little easier.

Consider instead, a society that accepts the fact that women and men create children through the act of sexual intercourse, not through any subsequent choice, and therefore should be equally responsible for those children. Since we (women) are the ones to carry and sustain a new life for nine months, shouldn’t we be the benchmark for these issues?  Shouldn’t men rise up to our level? What if we chose to deny the sexist notion that women were wholly responsible for child-rearing, instead of denying biological reality? What would happen if we convinced society to embrace pregnancy and child-rearing as human issues, not women’s issues? Perhaps women could be accepted as we are.