The rally before the Walk was this bizarre San Francisco weather fluctuation, alternating between warm sunshine and sudden, cold rain. It was funny to see the giant crowd suddenly covered with umbrellas, then back to people milling around, then a wave of umbrellas again. But after seeing what our friends on the East Coast went through, we could hardly complain about the weather.

I really liked the Walk’s speaker line up this year. The first speaker was David Daleiden of The Center for Medical Progress and #PPsellsbabyparts fame. It was cool to see a Millennial up there. The Walk also invited Obianuju (“Uju”) Ekeocha, a Nigerian woman who encouraged American pro-lifers to take their pro-life activism to a more global level.  There were also several portions of the rally given in both Spanish and English, which is nicely inclusive for the traditionally heavily Latino San Francisco crowd.


Last year during the Walk I was almost 8 months pregnant, which means this is the first year my daughter got to see it. My 10-month-old daughter was a trooper, watching the crowd curiously and especially enjoying exploring our banner. 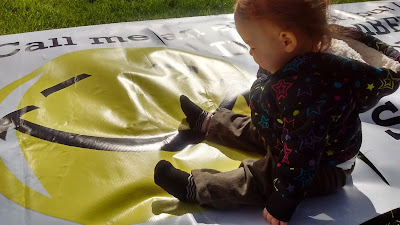 However, once the Walk actually started she slept through the entire thing. Not that she would’ve understood what’s going on anyway. As every year before, it was a huge column of people pouring into downtown San Francisco. We walked several city blocks before we even saw the counter protesters. Personally I enjoy the Walk more when there are more counter protesters there, and this year there was a larger crowd than there had been for several years past. Most of them seem to be affiliated with the group Stop Patriarchy. Here is a screencap from their website: 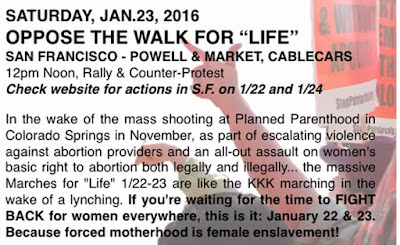 “Forced motherhood is female enslavement” was the slogan of the year, although they still had the classic “Pro-life, that’s a lie! You don’t care if women die!” I suspect that there may have been more counter protesters this year because of the Colorado shooting. In fact one woman specifically shouted in the face of fellow SPLer Terrisa, saying "You don't give a sh** about what happened in Colorado!” Terrisa felt that, given the sign she was holding, it didn't make sense for her to engage in a fight.

I give "Most Creative Counter Protest" to a man wearing a colorful sequined outfit that said “Roll for Choice,” and of course he had roller skates on. We had no “Roll for Life” counterpoint...this year. Maybe next time. 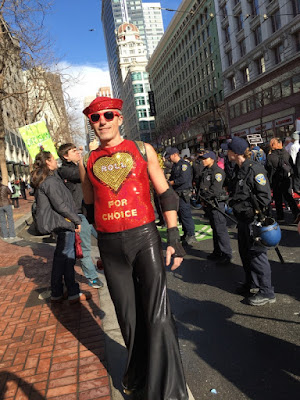 But besides a lot of shouting and a few rude gestures, the counter protest was not eventful. It helps that there is a dense line of police officers who separate the two sides and who make sure no one crosses from one side to the other. They won’t even let you walk too near them. Here's a (shaky) video of the bulk of the counter protest:


At one point we also saw an anti-abortion graphic photos group with large posters facing the Walk itself. I don’t think they were shouting anything though. At another point some construction workers about 5 or 6 stories above us kept cheering and using their air horn to get everyone to cheer back.

Sadly my sister and pro-life activist partner, Ellen, couldn’t come to the Walk this year, as she has now moved on to medical school in another state. This was unfortunate both because I miss her companionship and because she’s usually the one that takes all the photos of creative and unusual signs. And since this year is also the first in which I had to push a stroller, it was difficult for me to take the pictures either. I can say, as with every Walk I’ve gone to before now, there were a lot of nuns, priests, and monks in full dress, religious signs, and people singing hymns and praying. The rally before the Walk included much of the same: a lot of prayers from the podium and discussion of God's calling and so on. And I thought the same thing I thought every year: it’s not that I want pro-life events like this to scrub out any trace of religious belief, but I would like it if they operated in a way that more readily acknowledged not all present are believers.

Terrisa and I experienced a bit more of this the next day at the SFLA West Coast conference. (Originally Terrisa and Kelsey were going to table, but thanks to winter storm Jonas, Kelsey was stranded in some pile of snow on the East coast, so I went in her place.) At one point a nun from the Sisters of Life came to speak to us. She was very kind and told us all about their ministries, which include post-abortion counseling. I asked whether the counseling was designed for Christians specifically, and she explained they try to meet people where they’re at. She told us about how part of the process includes women going to designated days of prayer and healing, and often during those times the women name the children they never got to meet and focus on how those children are with God now, and how the women will eventually see them again.

I can see how this would be cathartic for those who share these beliefs, and I’m glad the Sisters of Life are there to help so many women through the grieving process. However I asked the Sister how they would handle that part of their ministry if an atheist woman came to them. My understanding of her answer was that she believes all people know somewhere in their hearts that when loved ones die, that is not the end of their relationships with said loved ones.

It’s possible the Sister meant that, even if you don’t believe in life after death, the relationship can go on through the memories you have or through some other symbolic means. But both Terrisa and I had the impression that she meant a version of the claim we’ve heard before: that there is not really such thing as an atheist. That is, many people seem to believe that deep down all of us know in our hearts that Christianity is true, or, at minimum, that God and the supernatural world exist. In this case, the implication seemed to be that all people sense we will eventually see our departed loved ones again.

Even if that is what the Sister meant, she clearly did not mean it in any kind of aggressive or challenging way, but as a comfort. I hold no ill will toward her. But to me that interaction was characteristic of what I expect when I participate in pro-life activism: I see the movement treated as a movement that belongs to Christians who are willing to host the rest of us as guests. But what I work and hope for is a diverse movement where we all are all hosts, so to speak—that is, the movement belongs to all of us.

The conference was still really enjoyable. Our table was again next to the table for Life Matters Journal, which we love. The people who table for LMJ are invariably friendly and funny and generous. They had a whole bunch of the decorative signs artsy Ms. Aimee had made for the Walk, and our tables jointly decided to line the signs along the hallway in the empty space next to us so everyone could appreciate them fully. Plenty of students stopped and took pictures. We took a few pictures ourselves. 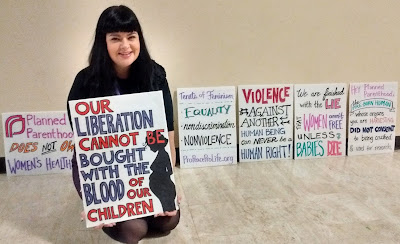 We also had a lot of great interactions with people. One woman told us she works as a lab technician for a physics department and sometimes gets into debates about abortion with the professors there. She said she directs them to our group all the time so they can see the pro-science pro-life view. Another woman told us about how she used to lead a college pro-life club; she found it frustrating when she asked her fellow pro-lifers why they were pro-life and they answered “because we are Christian.” A Christian herself, she wanted her group to be able to do outreach with a variety of people, so she was happy to take some of our materials to discuss with her friends. Another student told us that one of her friends was both pro-life and secular and hadn’t heard of us, and she (and we) were excited for her to return home and tell her friend about SPL. That’s definitely my favorite part of our outreach: when we find other secularists who are thrilled to realize they aren’t alone in their pro-lifeism.

If any of our readers are interested, you can find PDFs and JPEGs here of some of the materials we gave out at the conference as well as materials we've created before. Specifically, the conference materials included "Why Should Non-Christians Care About Abortion" and "10 tips to be inclusive."