Do women regret abortions? The problem with emotion-based morality 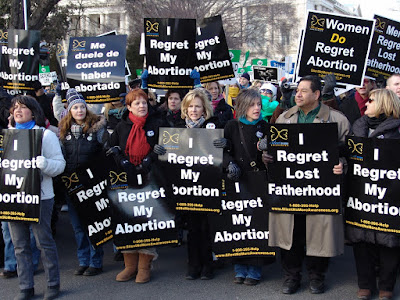 [Today's guest post by Sylwia Gryciuk is part of our paid blogging program.]

According to a study published last summer, a whopping 95% of women having abortions do not regret them in the short term. Unsurprisingly, such findings were widely commented upon in the pro-choice-friendly media, sometimes being triumphantly waved back at the pro-lifers. In her article written for the Guardian, Rebecca Schiller asks: “Women rarely regret their abortions. Why don’t we believe them?”

But what would believing actually mean, according to Schiller and the movement she represents? Well, throughout the article she makes it pretty clear that women’s emotions alone are a serious argument for loosening the abortion restrictions in the U.S.

In truth, the reliability of the study has already been criticized—it can be argued that the sample was self-selected, the three years covered by the study was too short a period for the grief and regret to surface in some women, and finally, that the sheer concept of regret is not that easily definable. But for a moment, let’s pretend that it’s a well-established fact that 95% of women do not ever regret their abortions. What should our response be? Is it really a fatal blow to the the pro-life movement? Do women’s emotions alone settle the debate?

I was thirteen when I saw the photos of aborted fetuses for the first time. I had always known that abortion takes a life, but thus far had not been aware of the violence involved. The images of the blood-soaked bodies, of the detached limbs and crushed faces seemed too gruesome to be real. But they were. I couldn’t believe how some people could still support abortion after viewing the pathetic piles of tiny corpses or that doctors performing these atrocities could still sleep at night. But they do. And so do I. After years the once powerful stimulus has lost its shock value, the once haunting images no longer horrify. Even though my interest in the abortion debate has only been growing I recently realized that my opposition to abortion is now largely intellectual, rather than emotional. I focus on facts, logic, and reason, while I refuse to be swayed by emotions. And that is the way it should be.

Last summer was also the time when the controversial Planned Parenthood videos started appearing. Disquieted, we watched as, in between mouthfuls of wine and salad, the PP workers talked idly about crushing fetal skulls, or amused, rummaged in the bloody mass of human remains. In their defense, the pro-choice movement argued that specialists become desensitize to stimuli which the laypeople find shocking and repulsive. To an extent, I agree. In similar vein, I can imagine, a pathologist casually eating her burger during the lunch break between the autopsies, even though most people, unfamiliar with the sights she encounters on a daily basis, would surely get their stomachs upset instead. But still, even if her emotions are likely not aroused, the pathologist is intellectually aware that what she’s dealing with are dead bodies of human beings, and that respectful attitude is required on her part. Here lies the crucial difference between her and the PP workers.

Do women regret abortion? Some do, some don’t and will never even come close. We should avoid absolute statements as they contribute to the destructive illusion that women’s emotions alone settle the morality debate surrounding abortion—the illusion which the pro-choice movement promotes as a hard fact. Indeed, they want us to believe that abortion is just a matter between woman and her god or woman and her conscience, and not a matter of someone’s life and death.

Surprisingly, even some of the non-theists among us seem to believe that every human is equipped with infallible, absolute conscience which, sooner or later, will come to sting. But in truth, many people live and die without a shadow of regret for their misdeeds and without the faintest need to be forgiven. Still, it does not make the damage they have done any less real, or the suffering they have caused to others or/and themselves any less significant. Similarly, I can easily imagine that many women—being repeatedly told that abortion is morally neutral or, in certain circumstances, morally right—will embrace the pro-choice narrative and here will lie their comfort ever since, waving off the potential regret. Still, it does not change the fact that abortion takes a life. Our emotions deceive us, our conscience fails us. They may be signs, but they should not set our routes. This is why emotions cannot be the basis for morality and surely, they cannot be the primary argument for modifications of laws.