Researchers have long struggled to quantify prejudice, and no method of measurement is perfect, but the housing app Abodo came up with a neat approach. Refraining from the use of slurs is a bare minimum of social decency. So Abodo tracked tweets by their state of origin and established a rate of tweets containing derogatory language per 100,000 tweets.  If you see that a region has a high rate of tweets containing slurs, it's a red flag that the community might be unwelcoming to racial minorities.

Abodo conducted this analysis for a number of categories, including prejudice against racial minorities, women, LGBT people, and people with cognitive disabilities.

The results make for interesting reading, and I encourage you to check out the full analysis. For our purposes, I'm encouraged to see that despite the "war on women" rhetoric, there is no indication that states with pro-life policies are more prejudiced toward women. Check out this map, where high concentrations of sexist tweets are indicated by warmer colors: Here's that same map, with each state's rank on Americans United for Life's 2016 Life List added (#1 being the most pro-life; click to enlarge): 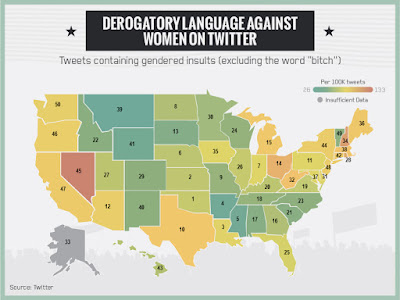 With the exception of #10 Texas, the top ten most pro-life states are more pro-woman than average. Conversely, seven of the ten most pro-abortion states have high concentrations of tweets containing gendered insults (the three exceptions being Vermont, Wyoming, and Hawaii).

A similar pattern emerges on the map of derogatory language against people with cognitive disabilities, who are frequently targeted for abortion. "Hot spots" appear in pro-abortion New England and West Coast states, while tweets from the pro-life Midwest and South express more tolerance: 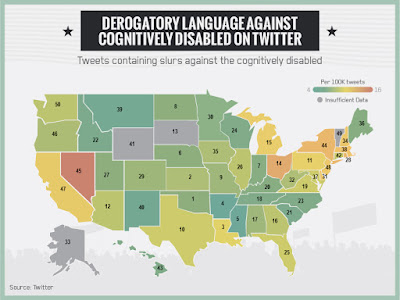 The pro-life community should always strive for improvement, but it's nice to see evidence that we are taking feminist and anti-ableist messages to heart.

Posted by secularprolife.org at 6:48 AM