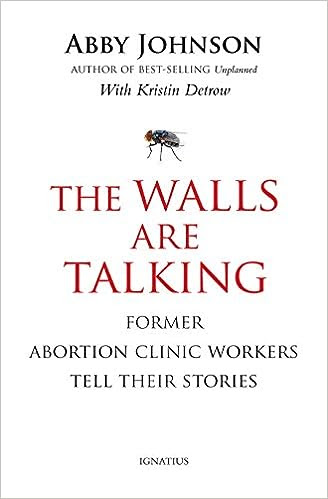 In 2009, Abby Johnson walked away from her management position at a Texas Planned Parenthood abortion facility and became a pro-woman
pro-life activist. You probably know her for her memoir, Unplanned. Or maybe you recognize her from this PSA that aired a few years back:

Abby went on to found And Then There Were None (ATTWN), an organization dedicated to meeting the needs of workers leaving the abortion industry. That has now led to a second book, The Walls Are Talking: Former Abortion Clinic Workers Tell Their Stories. It includes more from Abby, plus contributions from former abortion workers served by ATTWN.

The Walls Are Talking was released last week and is now the #1 best seller in Amazon's abortion & birth control category. From the description:


These stories are difficult to read, because an abortion is an act of violence, harming not only the obvious victim—the unborn child—but also the mother, the father, the doctor, and everyone else involved. But these stories also offer hope, for they show that anyone, no matter what part the person has played in an abortion, can start anew, can make amends for past mistakes. They demonstrate that the first step on that journey is telling the truth, as these courageous individuals do in these pages.

We'll have a review for you in the coming weeks. In the meantime, if you want to buy a copy, remember to use Amazon Smile to donate a portion of the purchase price to ATTWN or another pro-life charity.