Truth matters. I hope that I don't come off as pretentious or pedantic with this post, because that's not my intention. But the reality is that there are many arguments going around Facebook that are really, really bad arguments but are shared by well-meaning pro-life people who ought to know better.

The problem with memes is that they oversimplify issues and they convince no one. There's a reason why Frank Beckwith's Defending Life is 229 pages long, and Chris Kaczor's The Ethics of Abortion is 260 pages. It takes time and effort to build an argument, even if it only one pithy sentence to attack it. Memes are rhetorically powerful but lack substance. You can't present a compelling argument by sharing a meme. We really ought to quit sharing memes because they're helping contribute to the intellectual decline of our society.

Let's start with the first one. 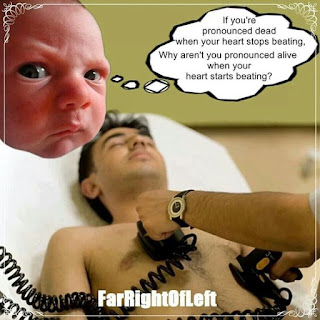 This argument states that since you are pronounced dead when your heart stops beating, you should be pronounced alive when your heart starts. But there is an immediate problem apparent with this meme: pro-life people don't believe life starts when the heart does, but it begins at conception. So why do so many pro-life people share this meme and make this argument? It presents a false case for the pro-life position, and it's also scientifically inaccurate.

I would encourage you to read Maureen Condic's "Life: Defining the Beginning by the End". Defining when life ends is not exactly clear-cut. When the heart stops beating has traditionally been seen as the event which heralds in your death, but with the advent of organ transplantation technology, around the 1960's the medical community changed it to brain death so that they could keep your body alive to allow your organs to stay alive for transplantation. However, even if we look at the heart stopping its beats, it's not that event, per se, that causes your death. When your heart stops, your cells shortly thereafter cease being able to communicate as a unified whole. It is this cessation of unified communication that is the actual death of a human being. So if we're going to take a symmetrical view to life, life begins when our cells start being able to communicate as a unified whole, which begins at fertilization. If we expect pro-choice people to believe that science is really on the pro-life side, we can't use scientifically inaccurate arguments to make our case. 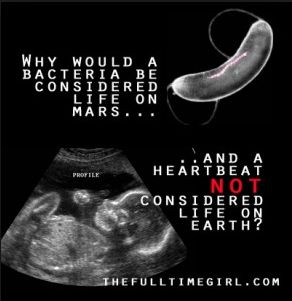 This next meme compares a human being to a bacteria, which is a false analogy. Additionally, it equivocates on the term "life" (which is usually the domain of the pro-choice advocate). Plus, it's another scientifically inaccurate, or at least very simplified, meme. Scientists may have discovered bacteria on Mars during the Viking program of the 1970s. However, saying that finding bacteria would be finding life on Mars is not the same thing as saying that they have found intelligent life on Mars. 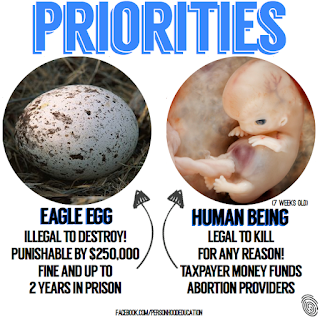 The reason that this argument is such a terrible one is because not all animals are protected by law. It is not illegal to kill chickens, cows, etc. for food. However, eagles are an endangered species, so they are protected by law. Humans are not currently an endangered species, but it is conceivable that if a catastrophic event happened and humans suddenly became endangered that our government would outlaw abortion. 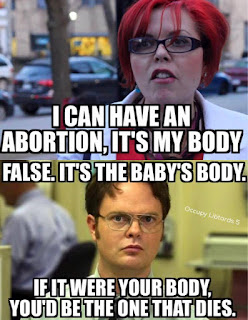 Finally, I'd like to address this argument, which I've seen several times in the past few days. The simple fact is this argument sets up a strawman to knock down. When a pro-choice person is saying "it's my body", there are at least three different things they might mean by it (in my experience). There might be some people who argue that the embryo/fetus is literally a part of the woman's body, but usually what they mean when they say "it's my body" is 1) It's in the womb, it's not in the world yet. We should terminate the pregnancy because bringing it into the world in my present situation would be to harm it (an "environment" argument, the E in Stephen Schwartz' SLED test); 2) It's in my body, and I can do whatever I want with anything in or on my body (a "sovereign zone" argument); or 3) I am not morally obligated to remain plugged in as life support, even if it is a full human person (a "right to refuse" argument).

So this meme doesn't respond to any of these three people. At best, it responds to a very small minority of pro-choice people who believe the embryo/fetus is a literal part of her body, like an appendage. But that's not what most pro-choice people mean when they say that.

Plus, to say "if it were your body, you'd be the one that dies" is silly, because that's only true of vital organs. You can remove one kidney, your appendix, your tonsils, etc., without dying. The only thing this statement would prove is that the embryo/fetus is not a vital organ.

My reason for writing this article is because I'd really like to see pro-life people raise the intellectual stakes when it comes to engaging with pro-choice people. Don't misrepresent their arguments but respond to their arguments directly. Don't use bad arguments against abortion, but stick with the good ones. The only thing sharing these memes serve to do is pat each other on the back and preach to the choir, but we should care more about winning the person than simply winning the argument.

Posted by Clinton Wilcox at 7:19 AM