The Canadian March for Life, Tomatoes, and Progress 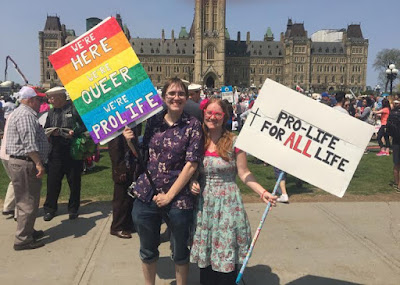 For the second year in a row, I took my home-made “We're Here, We're Queer, We're Pro-Life” sign out with me and my wife to March for Life on Parliament Hill in Ottawa. Just like last year, it was an incredible experience. I can't count the number of people who came up to take our picture, or just to quietly thank us for being there—even (or perhaps especially!) among the many, many conservative Catholics in attendance. Only one person we talked to told us that gay marriage was destroying families, and even he made sure to thank us for participating first. It was an amazing crowd, with an opening address by an Algonquin elder and attendees including both robed brothers of the Missionaires del'Evangile and the president of the Pro-Life Humanists.

After the march, when Billie and I decided to strike out early for our car, we were accosted by a group of counter-protesters just past the police escort's line of sight. They pelted us with tomatoes while running past us, screaming, “We're here, we're queer, we riot!”, flipped us off, and called us fascists. We were not the only protesters targeted; at least one other group, the aforementioned Pro-Life Humanists, had their banner vandalized by the fruit-wielding activists. And the previous night a number of people interrupted a candlelight vigil, causing a ruckus in which two people were arrested.

This feels significant not because we were violently persecuted—I mean, really, it was tomatoes, my first reaction was to laugh!—but because these incidents are demonstrative of the way some of the more radical segments of the left have been shifting. While the pro-life movement has been expanding, developing, and reforming itself, explicitly prioritizing love and care over blame and harassment and even helping abortion workers to leave the profession, it seems like the most hardcore pro-choicers have been adopting the same tactics they used to love accusing our side of. Recent incidents include bricks thrown through windows and aggressive disruption of pro-life events, and anyone on a university campus can tell you how difficult it can be to keep any kind of pro-life messaging intact and in place for long.

But the most important part of this, I suspect, is the fact that it was my transgender self and the humanist group that were specifically targeted. (Stopped by a crossing light a safe distance away from us, our new friends re-emphasized their chant with an outraged, “We're queer too!”, as if this somehow had bearing on the comparative validity of their mainly vegetable-based argument.) To the marchers, it seems, even if we're heathens, queers and humanists are allies in a struggle that transcends any lesser differences. But to the counter-protesters, we're a clear and present danger. We're evidence that this isn't just the campaign of religious patriarchy they want to dismiss it as, but a movement that can and will involve all kinds of people, and is doing so more and more every year. I think that worries them, and I think that's a really, really good sign.