Slate has always been hostile to the right to life, but this week's "Dear Prudence" advice column takes it to a new low.

Let's break this down.

Q. Daughter wants late-term abortion: My daughter left her husband, and now wants to abort what had been a wanted pregnancy. She is too far along to terminate in our state, but she could get it done elsewhere.

Translation: she is at least five months along. The baby looks like this: 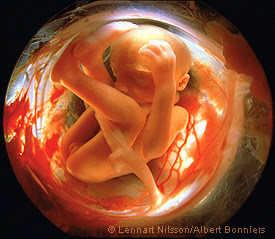 She asked me for money, to cover transportation and the procedure itself. My daughter says that she can’t have a child with her soon-to-be-ex and that he would block an adoption.

If Prudence had done the responsible thing and consulted a family law attorney for the column, this would have been a no-brainer. A father cannot simply demand that a mother raise a child, then walk away. If a father is going to "block an adoption," he must do so by taking on the responsibility of raising the child himself.

If the issue here is that she thinks he would make a lousy father—the column does not make that clear, but it's certainly possible that she left because he was abusive—then it's a matter of showing the court that he's unfit. Custody battles are certainly no fun, but are they worse than death?


This devastates me. I thought I was pro-choice, but everything in me screams that this is wrong.

Congratulations, you have a conscience.


But my daughter said that if I don’t help her, she’ll have to find “some other way,” and I’m afraid of what that might mean.

This is clear emotional blackmail. Prudence normally has no problem calling that out, but not in this case.


Also, my husband doesn’t yet know that our daughter wants to abort, but he would be even more devastated than I am. Should I help my daughter do this, or not?

If by "this" you mean make a rash decision to end the life of her wanted baby (who she has by now felt kick and likely seen on an ultrasound), and put her own life at risk in a dangerous late-term abortion, no. That's not helping your daughter.

My advice? Give your daughter real help. Set her up with an attorney and help her pay her legal expenses. Offer her and her baby space in your home. Take her to counseling. Tell her how much you love her. Any of those things would be a far greater investment in your family's well-being than spending your money on transportation and a paycheck for Leroy Carhart.

But Prudence will have none of that.

A: Being pro-choice doesn’t mean the specifics of every single abortion fills you with joy; being pro-choice simply means you believe the only person who should decide whether or not a woman should carry her pregnancy to term is the woman in question.

And, apparently, it means never daring to mention that someone carrying a wanted baby, in the late second or even third trimester, who is in the midst of an ugly divorce, and suddenly decides she wants an abortion, might be in a highly emotional state and consequently do something she will regret.


It’s understandable that you might grieve the loss of what you hoped would be your grandchild, but you need to deal with your emotions about this on your own, and not use your sadness as a reason to pressure your daughter into carrying an unwanted pregnancy to term.

This sentence makes me furious. "What you hoped would be your grandchild"?! Stop pretending. Stop playing rhetorical games. Have an ounce of courage and acknowledge that passage through the birth canal is not magic. This is her grandchild, and she has been asked to help kill her grandchild. "Sadness" is more than "understandable." And apparently, anything short of an enthusiastic denial of the truth, any suggestion that there is an alternative here, constitutes "pressure." (But, again, being in the middle of a divorce and all the emotional baggage that comes with it is a totally conducive to free choice.)


Your daughter was happy to have a child in a stable partnership under certain conditions but doesn’t feel equipped to have one by herself in the middle of a divorce and is determined to have an abortion. She’s going to get an abortion no matter how you feel about it.

Unless you, you know, talk her out of it and offer support for her! What is it with abortion advocates' willful blindness to the idea that a woman can change her mind?


You can either make having one more difficult for her, or you can help. That choice, at least, is yours alone.

So to recap: "help" means shelling out cash for the death of your grandchild and possible lifelong trauma to your daughter. Refusal to do so is selfishly "using your sadness to pressure your daughter."