Can Pro-Life People See the Future?

There's a pro-life argument that's been going around for some time, and it goes something like this: If you abort a child, you are, essentially, aborting all the generations that would have come after him or her. It's summed up in the following image: 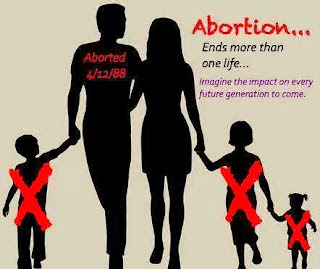 This argument has always struck me as bizarre, and it's even more strange to me that any pro-life people would take it seriously. The argument really doesn't make any sense to me, and I can't see it being persuasive to a thoughtful pro-choice person.

"Abortion ends more than one life"? How can it end a life that hasn't even begun? You can't end something if you don't even begin it. That's a major problem with the argument right there, but there are even bigger problems with it, which probably stem from a lack of reflection on what a person is, metaphysically speaking, and what it means to be a person. Let's think through the argument for a few minutes.

As stated in the previous paragraph, preventing someone from coming into existence is not the same thing as killing someone. It makes absolutely no sense to say that aborting one person ends more than that person's life, since none of the other potential lives have even begun. I can use myself as an example. I'm 34 years old. I am not married and I have no kids. Provided my life continues the way it has I could die without children. If that was the case, then if my mom had aborted me she would not have prevented any other lives from coming into existence. So the obvious question becomes: how do you know that any other lives will be affected when any one given child is aborted? We can argue concretely that the mother and father may be adversely affected, but we can't argue in the abstract that future lives will be prevented because there is no way for human beings to know that. And even if we did know, it is not clear that preventing someone from coming into existence is as bad as aborting a child, or is even immoral at all.

Consider two couples. One couple plans on having sex that night, but in the evening, after hard days of work, decide they're too tired and will do it tomorrow instead. Another couple plans on having sex but decide they are not ready to have another child, so they use contraception and prevent a new life from coming into existence. Given the argument above, that aborting someone "ends" (or prevents) more than one life, in order to be consistent, don't we also have to say that deciding against having sex at the last minute or using contraception are as immoral as abortion and for the same reason?

Of course one might say "but they will eventually have sex, possibly resulting in children that will have children of their own, yet in the case of abortion the child definitely will not be able to reproduce." Perhaps, but this illustrates why a discussion of personhood is not as simple as many believe it is. If the first couple was to conceive child A on day X, they would have child A. But if they decided to postpone sex until the next night, they might end up conceiving child B on day Y, a completely different child due to circumstances being different. Child A may have been conceived with blonde hair and green eyes, but the circumstances on day Y may have brought it about that the mother's recessive gene for blue eyes took over and the child now has blonde hair and blue eyes. Now eye color is an accidental, not an essential, property, so it may be that child B would be ontologically the same person as child A, but that would also depend on certain other mitigating factors.

If a God exists, he could certainly delay creating child A until the parents were able to have sex (on day Y instead of day X). However, whereas Mormons believe in the pre-existence of the soul, other faith traditions do not. Protestants and Catholics believe that the soul is created at fertilization with the human being, so it may be the case that a completely different human being came into existence when the parents delayed. Or if you don't believe in a soul at all, would the person who comes into existence after their conception is delayed be the same person as the one who would have come into existence had his or her parents not delayed?

Some would probably say that I'm over-thinking this argument, but the problem is that many pro-life people accept any argument that supports their view without thinking about it at all. This is one of those arguments that really doesn't make any sense once you really start to think about it.

So in order for this argument to work, you would need at least two things: (1) perfect knowledge of the future and (2) a metaphysics of time in which the future exists.

It's obvious that humans, being finite in knowledge, do not have perfect knowledge of the future. I can't tell you how many people told me there's no way Trump would become the Republican nominee. I certainly didn't see it coming. You can't know whether or not future generations will be affected by an abortion, and even if you could, preventing someone from coming into existence is not the same thing as taking someone out of existence.

Regarding the metaphysics of time, you also have to decide what the future is. There are two predominant theories of time: the A-theory and the B-theory, and under both of these theories I don't see how this argument is a good one. (See this article for more information on these two theories of time.)

The A-theory of time states that the only aspect of time that exists is the present. The future doesn't yet exist and the past no longer exists. Each moment we live moves us from the present into the future, and the past exists only as a memory. If this theory of time is correct, then there are literally no future people to harm. If a woman aborts, she is not harming anyone except for the unborn child being aborted because there are no future people who are being prevented from coming into existence.

The B-theory of time is the dominant view among philosophers and physicists (though, of course, simply being the dominant view doesn't make it the correct one). Under this theory of time, the future, past, and present all exist now and are all equally real. The passage of time is merely an illusion, a useful fiction to describe changes in the world around us. Under this theory of time, whether or not a woman aborts or a pro-life person saves the child doesn't affect anything in the future because what will happen will happen, and nothing we do will change it. If a woman aborts, she was always going to abort, and if a pro-life advocate persuades her to save her child, she was always going to save her child. In this case, there are no future people to save because the actions that occur were always going to occur. Nothing has changed, so no one has actually been prevented from coming into existence.

Now, there are arguments from the future that are good ones (e.g. Marquis' Future of Value argument, and Beckwith's Substance View argument). However, this argument is simply not a good one, and doesn't hold up to scrutiny.
Posted by Clinton Wilcox at 9:03 AM