Save the 1, an organization for people conceived in rape and their families, posted this meme on facebook recently: 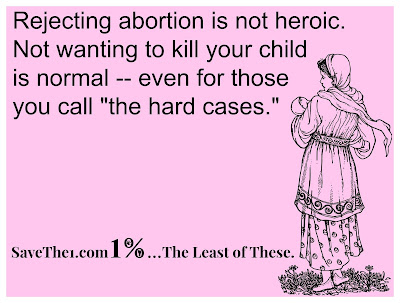 
Please do not refer to rape survivor mothers as heroes. Save the 1 mothers are offended every time they hear this. They think it's normal to love their children who were conceived in rape. Same thing for those who have children with special needs. How would you feel if someone told you that you are a hero for "actually loving" your own child and how extraordinary they think you are that you didn't want to kill your child?

I'll confess I've fallen into this trap. Certainly I have never said, would never in a million years say, something egregious like "Wow, I can't believe you love your baby! That's super weird!" I'm not a jerk. But Save the 1 points out that calling mothers in difficult circumstances "heroic" is the more positive side of the same coin.

I have used the language of heroism before, and not only in reference to women who conceive after a sexual assault; I've thrown it around for mothers who have chosen life in all kinds of situations. That's inconsistent of me. Refusing abortion may take maturity; it may take a leap of faith; it may take courage. But does it rise to the level of heroism?

As pro-life advocates, we believe that the right to life is a basic human right. Refraining from killing someone is meeting your bare minimum moral obligations. I've never killed anyone. I don't deserve a medal.

So is there any instance when we might say that a refusal to kill an unborn child is heroic? Yes. Far too often, pregnant mothers face physical violence—from the fathers of their children, from their pimps, and even from their own parents—in attempts to coerce an abortion. Women who defend themselves and their children from that type of aggression are definitely heroines in my book.

Of course, coercion may or may not coincide with "hard cases," but you can't know until you've heard the whole story. So let's listen to mothers. Let's not assume. Let's not inadvertently degrade the love they have for their children.