The Democratic and Republican Party conventions are coming up, and pro-life activists are on it.

Democrats for Life of America purchased a billboard to remind convention-goers in Philadelphia that the extremist pro-abortion party platform (i.e., taxpayer-funded late-term abortions at unregulated facilities) is risking millions of votes: 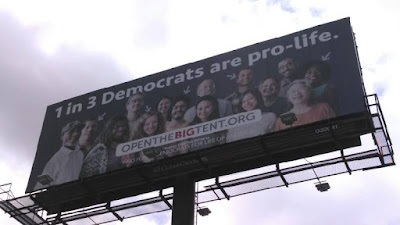 The convention begins July 25. You can sign a petition encouraging the Democratic party to get a clue at OpenTheBigTent.org.

Meanwhile, on the GOP side, pro-lifers aren't giving presumptive nominee Donald Trump a pass. The Donald's stance toward Planned Parenthood is wishy-washy at best. #OperationRNC wants language in the party platform to redirect funding from PP toward federally qualified health centers that don't promote or commit abortions. There will be several pro-life rallies in Cleveland this week, and #OperationRNC airplane banners throughout the convention itself.

The next couple of weeks should be very interesting.