Pro-life, but unwilling to say so

Better late than never on this story. Three weeks ago, Students for Life of America (SFLA) launched a new research initiative: the Institute for Pro-Life Advancement. Its focus is on polling and finding the best ways to convey the pro-life message. Its first paper, on Millennials' abortion views, is enlightening.

A central finding was that the majority of Millennials favor pro-life policies, including total or near-total abortion bans. Yet many hesitate to call themselves "pro-life." The report surmises that Millennials "don't want to associate themselves with the pro-life label" and suggests that we need to rebrand, but has little to say about the underlying causes. That's understandable; they didn't poll people about their reasons for denying their pro-life identity, and pure speculation doesn't belong in a think-tank-style white paper.

We're free to speculate, though, and my educated guess is that it has a lot to do with the idea that being pro-life means being anti-gay. That's not true, but countless "family values" groups have linked "life and marriage" to the detriment of life. In a not unrelated vein, there's the stereotype that you have to be religious to be pro-life. Obviously, Secular Pro-Life is hard at work on that!

The section on abortion advocates' rebranding as compassionate islands in a sea of "stigma" is an interesting read. The abortion movement's blatant reliance on emotional appeals creates an opening for us to be the movement of facts. This doesn't only mean scientific advocacy like educating people about prenatal development (which we should keep doing), but also on pointing out the basic reality that a lot of people walking around today would be dead if the "compassionate" abortion lobby had its way.

The Institute for Pro-Life Advancement also recommends that we continue voicing our feminist objections to abortion. Given the success of last month's Pro-Life Women's Conference, I have no doubt the pro-life movement will do exactly that. The Supreme Court may be hostile to our concern for women's health, but there are other arenas where we can make a difference, starting with our local pregnancy centers and maternity homes. 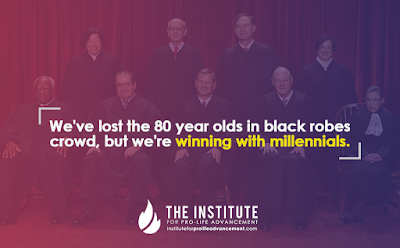