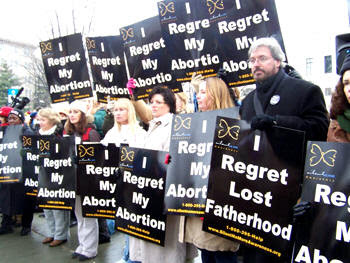 Whenever I attend the March for Life, I see them: the handful of men, bundled up in the cold, holding signs that say "I regret lost fatherhood." They are heavily outnumbered by the surrounding women carrying "I regret my abortion" signs.

On this blog, we've talked a lot about abortions caused by coercive male partners, which is certainly a problem worth discussing. But I now realize we've devoted less attention to the good guys than we should. Who are the men who regret lost fatherhood?

A Father's Choice, by Anthony Perry, is the true story of one such man. The title is ironic, as it's clear from the beginning that he is fighting a losing battle and that his child will be killed. It may take two to tango, but by law, only one has the lethal power of "choice." My chief complaint is that the story carries no suspense; we all know how it will end. But how could it be otherwise?

This is a heartbreaking book. Perry tries everything. He promises to be there for his girlfriend Jenny and their child, and to provide financial support. She repeatedly tells him that she's keeping an open mind. In the interest of staying on her good side and demonstrating his reliability, he reluctantly accompanies her to an initial pre-abortion appointment, where he reads a brochure that describes in graphic detail how his child will die. When she expresses concern about having a baby before she's fulfilled her dream of traveling, he comes up with possibilities for traveling on a budget. But nothing is enough. She finally confesses that she had been stringing him along, and had decided on abortion the moment she found out she was pregnant.

Despite his efforts, he blames himself:

Jenny had made this choice because of me. She had said that had she been in love with me, she would have kept the baby. But she wasn’t, and so she wouldn’t. “Love is either there, or it isn’t,” she said. Those words endlessly repeated themselves in my head, cutting each time like a razor blade.

Perry experiences an emotional roller coaster I wouldn't wish on my worst enemy. Although Perry eventually marries a pro-life woman and has other children, he never forgets their lost older sibling.

I recommend this memoir to anyone involved in sidewalk advocacy, pregnancy options counseling, or post-abortion counseling. And I particularly recommend it to pro-life young men who are about to become, or have recently become, sexually active. As a woman, I'm very wary of dating "pro-choice" men, but at least I have the law on my side. Men, you don't. Know what you're getting into, understand the worst-case scenario, and keep Perry's story in mind when considering potential partners. You do have a choice, but you must exercise it early. Choose wisely.

A Father's Choice is available on Amazon in paperback and Kindle format.