A quarter of Americans are religiously unaffiliated

A new report by the Public Religion Research Institute (PRRI) shows that religiously unaffiliated Americans now make up a quarter of the American population—making us, ironically, the largest "religious group" in the country.

Consistent with previous surveys, PRRI found that Millennials are driving the trend (click to enlarge): 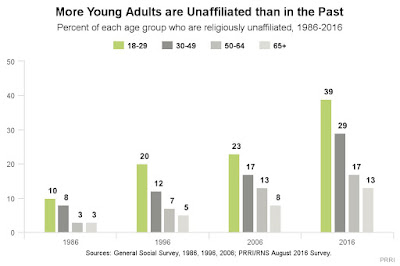 But there is an important point of consensus: 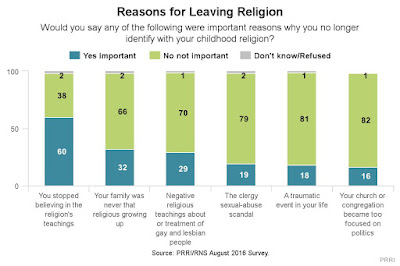 Simply ceasing to believe in doctrine is by far the most common reason (and happens to be my own personal reason). 29% say that "negative religious teachings about or treatment of gay and lesbian people" played a role. Pro-life advocacy did not make the list of reasons people leave organized religion, except to the extent that it is part of the umbrella of "too focused on politics," which was the least common answer at 16%.

There are two take-aways for the pro-life movement. First, the pro-life movement cannot effectively reach people of reproductive age with an exclusively religion-based message. 39% of 18- to 29-year-olds, and 29% of 30- to 49-year-olds, are religiously unaffiliated. They experience unplanned pregnancies too. "Pray to end abortion" signs aren't going to cut it. Secular Pro-Life has tons of free resources and videos you can use in your pro-life outreach.

The second take-away, however, is that within religious communities, churches should not hesitate to implement pro-life programs. Non-political programs in particular, like baby showers for mothers in need, pose little risk of alienating members. (And if they do, do you really want those members anyway?)