What You Can Do on Planned Parenthood's 100th Anniversary 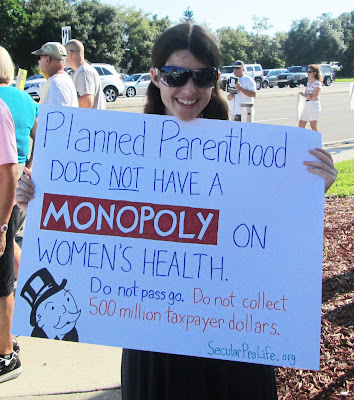 This Sunday, October 16, marks the 100th anniversary of Planned Parenthood. It's a sordid history. Planned Parenthood began as a contraceptive provider... but for all the wrong reasons. In the words of its founder, Margaret Sanger:


It has been conservatively estimated that no less than one quarter of the gross incomes of our states is expended upon the upkeep of asylums for the feeble-minded and insane, the mentally defective, the criminal, the congenitally defective, the delinquent and the dependent. We are spending billions, literally billions, keeping alive thousands who never, in all human compassion, should have been brought into this world. We are spending more in maintaining morons than in developing the inherent talents of gifted children. We are coddling the incurably defective and neglecting potential geniuses.

We have not chosen this Sisyphean task; it has been forced on us because we have left the production of American children to chance, instead of bringing this most important of all human functions within the sphere of choice.

Until the leaders of American business decide to cooperate in this analysis of our biological and racial problems we shall be at a loss to answer such critics as Luther Burbank, to whom American civilization is deeply indebted. In a recent interview he is quoted as asserting:

"America . . . is like a garden in which the gardener pays no attention to the weeds. Our criminals are our weeds, and weeds breed fast and are intensely hardy. They must be eliminated. Stop permitting criminals and weaklings to reproduce. All over the country to-day we have enormous insane asylums and similar institutions where we nourish the unfit and criminal instead of exterminating them. Nature eliminates the weeds, but we turn them into parasites and allow them to reproduce."

Today, Planned Parenthood's racist and ableist roots, and its hatred of the "weak," are on display in its vehement promotion of abortion. Millions of preborn children have lost their lives in Planned Parenthood facilities. In recent years, Planned Parenthood has ruthlessly expanded its share of the abortion market, while reducing its provision of legitimate healthcare.

Pro-life advocates can respond in a number of ways:

Here's my video submission (which is loosely based on this blog post):