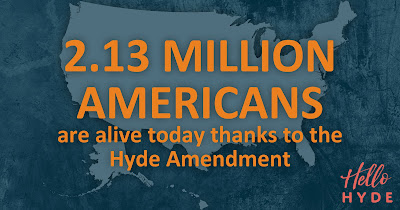 [Cross-posted from the #HelloHyde campaign]

We’re pleased to say that the celebration was successful! You’ll be scrolling quite a while to get through all the #HelloHyde tweets. Many of you made use of our automated platform to tweet the photos and stories of Medicaid kids, plus state-by-state statistics of the lives saved by the Hyde Amendment. We’re glad that was helpful and will definitely keep that feature.

We had hoped to get #HelloHyde trending; unfortunately, that did not happen. But the opposing hashtag, #BeBoldEndHyde, didn’t trend either. We expected that at the very least, the two hashtags combined would at least cause “Hyde Amendment” to trend. That didn’t happen. What that tells us is that the narrative is still very much up for grabs. Most people aren’t engaged on the Hyde Amendment either way. Seeing as it’s been in place with bipartisan consensus for 40 years, the abortion lobby has a tough road ahead if they’re going to convince the American public that they should subsidize the deaths of low-income children. We’re going to make that road even tougher.

Which brings us to what we think is our biggest victory so far: our influence on messaging. In the past, the pro-life movement has talked about the Hyde Amendment primarily in terms of taxpayer conscience; somehow, all the human beings alive today because of the Hyde Amendment got lost in the shuffle. Not anymore. Numerous pro-life organizations have gotten on board with our Medicaid-kids-first message. The taxpayer conscience message is still part of the equation (as it should be) but is now secondary (as it should be).

In particular, we worked in close partnership with the Charlotte Lozier Institute to center the focus on Medicaid kids. Their report that the Hyde Amendment has saved the lives of over 2 million people got a huge amount of attention, both from pro-life organizations and from media outlets. A Google News search for “Hyde Amendment 2 million” brings up over 58,000 results!

So what comes next?

Then there’s parts 2 and 3: preserving and expanding the Hyde Amendment. The pro-life movement’s next steps in this area will largely depend of the outcome of the November elections. As you might remember from high school civics, spending bills must originate in the House, and the House is expected to retain its pro-life majority. But if the Senate is overtaken by pro-abortion radicals, they could attempt to pick a fight on the Hyde Amendment and even cause a government shutdown. Conversely, if November goes well for the pro-life movement, making the Hyde Amendment permanent law rather than an annual budget rider will be a top priority. Either way, #HelloHyde will be involved to ensure that the faces of Medicaid kids are seen and that the voices of Medicaid kids are heard.

As you can see, we still have a lot of work to do! In addition to spreading this message, you can help us in our next phase by making a monetary donation to Secular Pro-Life (our parent organization). The abortion lobby is very well-funded, but our cause is greater and with your help we can go head-to-head with them. Every contribution makes a difference. The anniversary may have passed, but Medicaid kids are still being conceived every day. The Hyde Amendment has been protecting the most vulnerable members of the human family for 40 years. Now, more than ever, we must protect the Hyde Amendment.