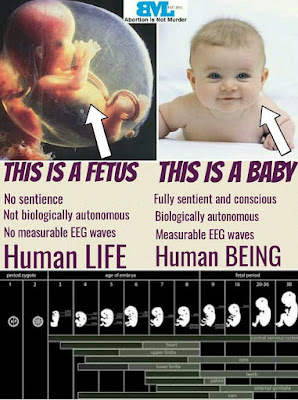 This image is incredibly misleading. It relies not only on bad science, but on false definitions of common words.

First, let's look at the definition it gives for "a baby", a.k.a. a "human being": "Fully sentient and conscious," "biologically autonomous," "measurable EEG waves." It is a "human being," as opposed to a "human life." The first issue with this definition is glaringly obvious: under this definition, my pet dog is a human being. She is fully sentient and conscious, she is biologically autonomous, and she has measurable EEG waves. So my dog should be considered a human being.

The second glaring issue with this definition is that it doesn't get at the essential property of human beings. As shown in my dog example, if this is the definition of human beings, then all animals that fit these criteria should be considered human life. But while humans are the kinds of things that develop sentience, consciousness, biological autonomy, and measurable EEG waves, this is not what it means to be human. To be human is to have a rational nature, something fetuses have as well as everyone who reads this image has. Having a rational nature is what sets us apart from animals and is what distinguishes us from other animals in the animal kingdom.

Third, there is simple equivocation going on here. Equivocation is an informal logical fallacy in which you prove a conclusion by using a word in two different senses in your argument. The pro-life position is not simply that the fetus is "a human life." The pro-life argument contests that there is something intrinsically different between a human fetus, a human life in one sense, and a human skin cell, which is human life in a completely different sense. Calling the fetus "a human life" is no argument against the pro-life position. Second, there is an equivocation on the word "being," since a "being" is merely something that exists. Under the usual definition of "being," the human fetus counts as a human being.

Fourth, their definitions are simply absurd.

1) "No sentience" -- sentience is simply understood as the capacity to feel and experience sensations, such as pain. But the fetus is able to experience sensations (fetuses have been observed sucking their thumb, fighting with a twin, and even responding to their mother's voice), and though this is a bit of a controversial point, they are also able to feel pain (due to having a functioning nervous system, at least late in pregnancy). This is all beside the obvious point that they have this capacity inherently, if not presently. I cease to be conscious every night when I fall asleep, yet I do not cease to be a human being. I also cease to be sentient, for the most part, when I fall asleep. While something extremely painful could rouse me from my sleep, something mildly painful, such as a pinprick, will not.

3) "No measurable EEG waves" -- this argument amounts to obfuscation on the part of the person who created the meme. EEG waves definitely begin in the womb, before the fetus is born, yet the image is not specific as to how old the fetus in the womb they are pointing to is. The baby they are pointing to on the right had EEG waves for a while before being born. The time that measurable EEG waves develop is hotly debated. Some pro-life people place brainwaves around six weeks in utero (pointing to H. Hamlin's article "Life or Death by EEG," JAMA, Oct. 12, 1964, p. 120 as evidence), and abortion-choice people, such as David Boonin in A Defense of Abortion, point to late in the pregnancy, around 22-27 weeks. At any rate, whether or not the fetus has measurable EEG waves, as I already mentioned, does not determine whether or not the fetus is a human being.

The final point to be made is regarding the chart on the bottom. The bottom chart is simply incorrect about human development.

1) The "zygote" stage is considered part of the "embryonic" stage. It is not a separate stage in development. The embryonic stage is the stage from fertilization until about two months, then the fetus stage is from two months up until birth. What sets the fetus stage apart from the embryo stage is that all of the fetus' organs and organ systems, at least at a rudimentary level, have developed and are in place. All it needs now is time to develop these faculties further and to grow to be able to survive outside the womb.

2) The "zygote" stage is only the single cell stage, but the image has "zygote" at the two-cell stage and at a further multi-cell stage. The single cell that develops from fertilization is known as the zygote, and once the zygote cell divides, the two cells are called blastomeres. At the multicellular stage in the second image, that is known as the morula stage. Those two pictures do not represent zygotes.

It is clear that many abortion-choice advocates don't really understand science when they want to try and criticize the pro-life position. Unfortunately, ideology can often blind a person to reality.

Posted by Clinton Wilcox at 7:04 AM