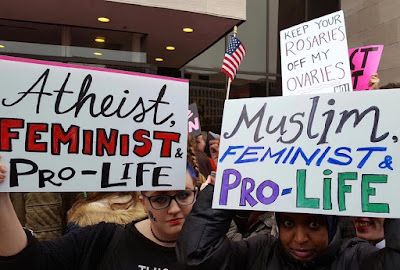 Gallup recently asked residents of all fifty U.S. states to identify themselves as "very religious," moderately religious," or "nonreligious," and used this data to rank the states by religiosity. It found that Mississippi has the largest percentage of residents who are "very religious," at 59%. The least religious states are concentrated in New England: Vermont (21%), Maine (23%), and Massachusetts (25%).

The following table compares states' religiosity against two measures of its progress (or lack thereof) on the right to life: its legal ranking, via Americans United for Life, and its abortion rate, via the Guttmacher Institute. (We previously explored the correlation between pro-life laws and low abortion rates.)


Clearly, a correlation exists: more religious states tend to enjoy better pro-life laws and lower abortion rates.* The correlation is not perfect; to take one example, New Mexico and Indiana are very similar in terms of religiosity (41% "very religious" and 30% "nonreligious"), but New Mexico ranks far lower on AUL's list and its abortion rate is nearly double that of Indiana.

Let us leave no unborn child behind. If you support a secular approach that meets people where they are, please donate to Secular Pro-Life.