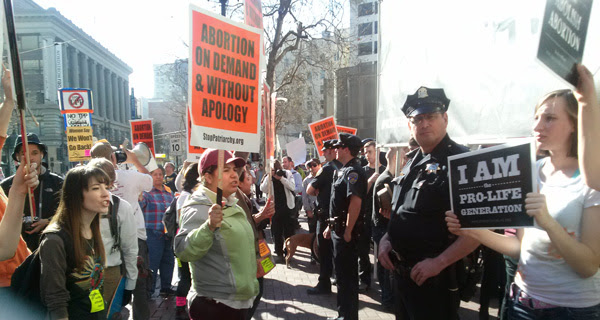 The #ProtestPP rallies earlier this month sparked a debate between Planned Parenthood and more radical abortion groups, particularly those with a socialist bent. Planned Parenthood strongly discouraged counter-protests, apparently fearing violence from their own supporters:


“When we think about a counterprotest happening, even folks with the best intentions,” Adrienne Verrilli of Planned Parenthood of New York City says, “all it takes one person to react to an ‘anti’ and things can escalate very quickly.”

But the radicals defied Planned Parenthood and showed up anyway, albeit not at all of the hundreds of #ProtestPP locations; not surprisingly, the socialist effort was mainly contained to liberal cities. In an article published two days after #ProtestPP on a socialist news site, entitled "It was right to confront the anti-choice bigots," the author quoted a Boston abortion supporter as saying:

I'll keep protesting until the day I die if I have to. No one should have to walk through the gauntlet of those disgusting so-called people.

When I read that quote, and particularly the dehumanizing line referring to me and my friends as "so-called people," a strange feeling arose in my stomach.

I had felt it once before, in 2013, after reading the then-viral article "So what if abortion ends life?" at Salon. There, author Mary Elizabeth Williams fully acknowledged the humanity of unborn children, but defended abortion anyway by boldly declaring that "All life is not equal." Chillingly, she concluded the article as follows:


[Abortion] saves lives not just in the most medically literal way, but in the roads that women who have choice then get to go down, in the possibilities for them and for their families. And I would put the life of a mother over the life of a fetus every single time—even if I still need to acknowledge my conviction that the fetus is indeed a life. A life worth sacrificing.

It was not lost on me that if a fetus—whose life, again, Ms. Williams fully acknowledged—can be "sacrificed" because he or she is in the mother's way, there was no logical reason why my friends and I could not also be sacrificed for the cause of gender equality. After all, our defense of unborn children makes us just as much a "roadblock" for women as the unborn children themselves.

Pro-choice violence against pro-life advocates is not unheard of, although it is largely ignored by mainstream media. So far, it has claimed only one fatality that I know of. (The violence of abortion itself, women maimed and killed by abortionists, the Gosnell scandal, etc. are outside the scope of this article.) Thankfully, anecdotal reports from #ProtestPP indicate that while some pro-lifers were attacked, the incidents were mild grabbing-and-shoving affairs (and, in one case, whipping with plastic jump ropes) with no serious injuries.

But I worry that conditions are ripe for a significant increase in violence against pro-life advocates. Human beings, whatever their political persuasion, are much more prone to violence when the cause seems hopeless and desperate. (That's an observation, not an excuse.) For most of the past fifty years, abortion advocates simply haven't had much reason to feel that way. Not so anymore. And when a group looks to justify violence, dehumanizing language is always the first step.

I hope that the abortion movement does not take the short step from dehumanizing preborn children to dehumanizing pro-lifers. I hope my advice is never needed. But at the risk of sounding alarmist, I want to suggest a few tips for dealing with this possibility.

We do not know when or where pro-choice violence will arise, but we can be smart about our interactions. The most important thing is to shield the families and elderly people in the group. If you are a healthy young person with no dependents, you may need to physically put yourself on the front line for the protection of others. Visualize in advance what you will do in that situation. Have a plan.

If, FSM forbid, you are attacked, I generally recommend that you do not fight back. Yes, self-defense is morally justified, and it might be appropriate depending on the circumstances. But remember the schoolyard rule: adult bystanders notice the second kid to throw a punch, not the bully who threw the first punch. Or, as the Rev. Dr. Martin Luther King, Jr. put it much more eloquently than I ever could, "Nonviolence is a powerful and just weapon, which cuts without wounding and ennobles the man who wields it. It is a sword that heals."

And finally, everybody has a cell phone these days. Talk to your friends before each event and agree that if any one of you is attacked, someone else will film. Ideally, live stream it to facebook so that no one can credibly accuse you of "deceptively editing" the footage.