A Day with Created Equal

Back in January, I made the acquaintance of some delightful human beings from the Created Equal staff. There are two pretty significant differences between Secular Pro-Life and Created Equal:
Despite these differences, we hit it off immediately. And when they found out that I live in Florida, they invited me to meet up with them during Justice Ride. Justice Ride is Created Equal's spring break bus tour that takes students to universities and abortion centers throughout Florida to conduct pro-life outreach.

And so it was that I took Tuesday afternoon and Wednesday off from work (coincidentally coinciding with the Day Without a Woman) and drove three hours to Tampa.

Tuesday Night
The 55 riders (most of whom I did not know) had been conducting outreach all day, and I met up with them just in time for the R&R part of the itinerary. We stayed at a retreat center featuring bunk beds in cabins, human foosball, and delicious food. After dinner and games, it was time for... praise and worship, which I spent in the back of the room, inventing harmonies and sharing knowing glances with the people who were aware of my atheism.

Immediately following worship, Created Equal director Mark Harrington publicly introduced me and my affiliation, which caused dozens of people to suddenly realize that an atheist had been with them the whole time. (Good thinking to wait until after worship, Mark!) Everyone was very welcoming toward me and gave me a warm round of applause.

Later, a smaller group broke off and enjoyed a jam session with Created Equal's intern on guitar. He performed Elvis Presley's "Devil in Disguise" for me, to much laughter. [Note to Christians: He got away with it because he is a personal friend who understands my weird sense of humor and knew that I would find it charming. Do not try this at home.]

Wednesday
We went out to University of South Florida to conduct pro-life outreach from about 9 in the morning to 3 in the afternoon. We were joined by students from USF Bulls for Life. Signs were placed throughout a common green area near the library. Some featured photos of abortion victims; some featured photos of living preborn children; and others highlighted women killed by the legal abortion industry, like Tonya Reaves and Jennifer Morbelli. We stood by the signs inviting passers-by to engage ("What do you think about abortion?") and handing out pamphlets. I'm pleased to report that all of the signs and pamphlets are secular. Good job, Created Equal! 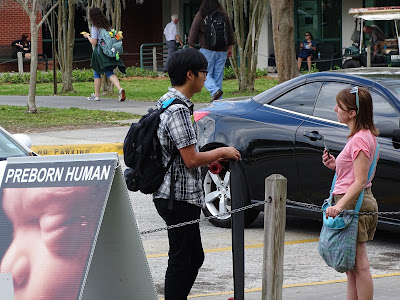 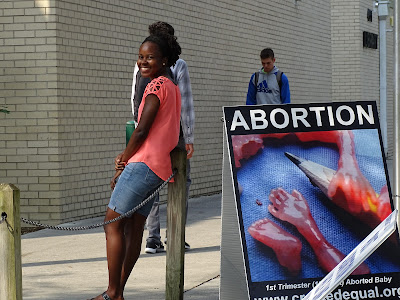 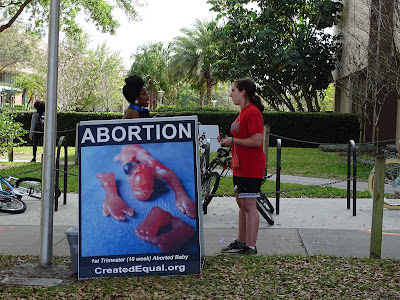 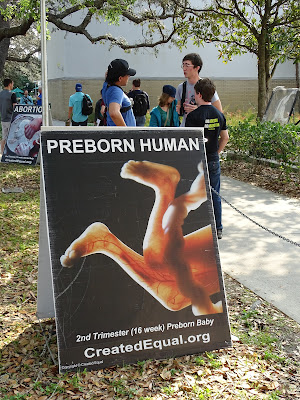 I had some great interactions with middle-of-the-road people who were trying to draw a line. First trimester? Brain activity? Ability to feel pain? I'm all about discussing how those criteria might apply and what that would mean for human rights. A lot of it was simple myth-debunking. For example, one person I spoke to was under the mistaken belief that if a pregnant woman were to place her child for adoption instead of aborting, that child would go into the foster care system. Once I explained that birth mothers actually have the opportunity to select a permanent family for the child, and that there is a long list of waiting families, he saw adoption as a much more realistic and compassionate alternative to abortion. In addition to conversing with folks on my own, I was also summoned to join conversations in progress that had gone on convoluted religious sidetracks. Glad to be of service!

These were interesting, thought-provoking conversations that got people moving in a more pro-life direction. Most important, they were civil. One person shared that a few days earlier, a street preacher had been on campus shouting hellfire and damnation at people. He had claimed to be pro-life... and also a prophet, so, probably not the picture of mental health. I was glad we were there to give an alternative picture of what our movement is about, and undo a bit of that damage.

I had expected to hear more from strong abortion supporters. After all, if the tables were turned and an abortion advocate engaged me with "What do you think about abortion?" I would be trying to convert them to my point of view! I assumed the reverse would also happen. Not so. Those most interested in speaking with me were from the "mushy middle" or unsure where they stood. The abortion supporters weren't inclined to defend their position. A handful briefly carried signs with pro-choice slogans, or wrote them with chalk on the nearby sidewalk. Some yelled profanities at us as they walked by, but hey, freedom of speech. Nothing we haven't heard before. They mostly stayed within lawful bounds... with one very memorable exception.

A woman grabbed one of Created Equal's signs and started running off with it. I watched her as she made it around a bend, then tripped over herself and fell down HARD. It was not pretty, and it got everybody's attention. Yes, she brought it upon herself, but I genuinely felt sorry for her. I didn't see what happened next, but I have it on good, contemporaneous authority that she (a) was pretty bruised up but is going to be okay, and (b) for some reason flashed her breasts at the people who were trying to help her.

All in all, it was quite an experience, and I wish I could have stayed for more than 24 hours. If you're interested, Created Equal will be at University of North Florida in Jacksonville today. That will conclude this season's Justice Ride. The dates for next one should be announced on their website soon. Tell 'em Kelsey sent you.