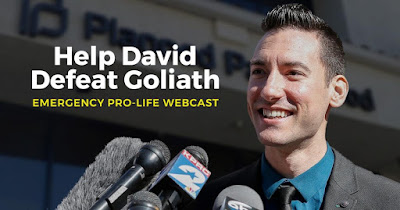 David Daleiden of the Center for Medical Progress, who exposed Planned Parenthood's gruesome trade in the remains of abortion victims, has been charged with 15 felonies for his undercover work. Xavier Becerra, the California prosecutor who brought these charges, received campaign contributions from the abortion industry.

Tonight, David and his lawyers will present a webcast to bring us all up to date on his legal battle. Secular Pro-Life is not an official sponsor of this webcast, and it is guaranteed to include some religious content, because the organizers are going with a David vs. Goliath theme. (To be fair, that's a hard allusion to pass up under the circumstances!) Regardless, I'm sure it will be of interest to our readers. It's hard to overstate the impact that the Center for Medical Progress has had on the pro-life movement.

Register to attend the webcast at StandWithDavid.com. The webcast will begin at 9pm Eastern (8pm Central, 7pm Mountain, 6pm Pacific).

P.P.S.—David will be arraigned in San Francisco on May 3rd. It just so happens that SPL's west coast coordinator, Terrisa Bukovinac, also heads up Pro-Life Future of San Francisco. They will have a presence outside the courthouse to support David during this difficult time. The time of the arraignment is TBD, but stay tuned for details.

Posted by secularprolife.org at 7:19 AM