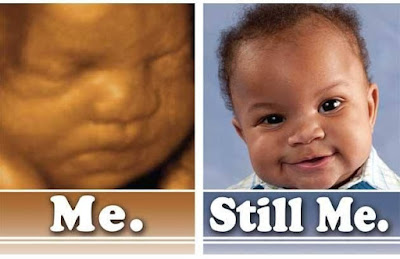 I believe that there is a common and insidious cultural misconception with regards to fetuses: the subtle idea that birth is the true beginning of a human’s life, not only because that is when he or she is first socially acknowledged and welcomed by the rest of the species, but also because deep down we assume that birth is when the young humans themselves first experience anything of significance in the world. After all, what could fetuses be doing in there if not sleepily kicking around in the womb, waiting for life to begin? We seem to have this perception that a fetus is utterly unaware of anything, pending the moment of awakening.

By contrast, infants from the very second they emerge are perceived as awake and alert. We marvel that a baby is constantly seeing, hearing, observing, learning, developing, experiencing. It is as if we believe that birth is the moment when a young human is switched from OFF to ON, sort of like a machine you just finished constructing and are now ready to plug in for the first time.

But the truth is rarely so simple, and in actual fact scientific studies are repeatedly demonstrating that there is very little infants do that fetuses haven’t done first (and that the womb may be a more stimulating and interesting place than we thought).

For example, scientific studies have confirmed that fetuses can hear voices and distinguish between unique speech patterns, allowing them to recognize (and prefer) their mother’s voice over any other’s. It has also been shown that a fetus will learn to recognize a song or story repeatedly played/read to them, retaining a familiarity with that tune or story post-birth. This is referred to by scientists as “preconscious learning.” A fetus’s brain will even notice when a familiar song is played slightly incorrectly, requiring some basic ability to remember what the song ought to sound like and then compare the two.

Adding to this list is the latest discovery, and this one’s on the level of groundbreaking: new research out of Lancaster University in the United Kingdom demonstrates that fetuses will react to face-like shapes in the same way infants do. Researchers shone different collections of red dots to fetuses while observing their responses via ultrasound, and the fetuses displayed particular interest in face-like clusters. As the researchers themselves point out, “This tells us that the fetus isn’t a passive processor of environmental information. It’s an active responder.”

This paper is trailblazing because it’s the first real study on what fetuses see, and confirms that they do have visual experiences while in utero. The womb is not pitch-black like many assume (and nor is it silent either). One of the paper’s authors describes what fetuses likely experience as similar to being in a room with the lights turned off and the curtains drawn over the windows, yet it’s very bright outside. Fetuses are thought to begin to see as early as 20-24 weeks gestation, so they’ll have quite a while to watch shadowy shapes pass by before they are even born.

This study is also important because even though it’s been known for a long time that infants are particularly interested in face-like shapes, scientists often speculated if maybe infants prefer those shapes because human faces are what infants see first and most often—almost like imprinting. This study indicates that preference may run deeper than that.

Most important of all, the implications of this successful attempt to visually communicate something to a fetus in a simple way will almost certainly lead to new and extremely exciting studies of fetal cognition—for example, exploring if fetuses can distinguish numbers and quantities, as newborns do.

And once we know more about not only how fetuses are developing physically, but also their cognitive abilities, well… I suspect that it will become harder and harder for some people to insist that a fetus and an infant are worlds apart, or that a fetus doesn’t even count as human at all. And now we come to the crux of the matter: beyond the scientific curiosity of it all, what do studies like these tell us about the topic of abortion?

The fact is, no matter how many of these incredible studies emerge, they can’t definitively answer the ethical and legal questions our society has raised surrounded abortion. Science doesn’t dictate morality. It is absolutely, 100% possible for two reasonable, intelligent, and compassionate people to both read the same studies of fetal development with wonder and fascination, and still reach vastly opposing conclusions about whether causing the intentional death of a human fetus should be illegal.

So if you do draw a line between a human worthy of rights and protection vs a clump of cells that is not—and since the majority of Americans support abortion restrictions at some stage of development, it’s clear many Americans believe a line should be drawn somewhere—how do you decide where? When the heartbeat begins? After the first trimester? Viability? Birth?

Science can answer many of the questions we raise in order to navigate the murky waters of morality, and it can shine a light on crucial truths. Study after study is constantly showing us that human fetuses are hitting many milestones far earlier than previously believed, which ultimately makes it more difficult to argue that society’s insistence of relying upon any of those developmental milestones to tell us when a human life earns acknowledgement is not completely arbitrary.

This most recent study of what fetuses are capable of is yet further indication that as monumental as birth is, it is not the beginning of a human being’s life, learning, or experiences, or the start of anything that wasn’t already happening before. The physical movement of a baby from within the womb to outside the womb does not really endow it with all that many new abilities or change anything intrinsically about it, biologically speaking, so why should that change its worth? A question worth pondering.