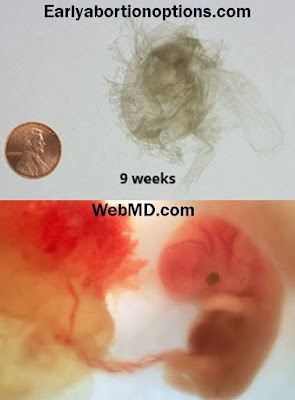 Top: a "photo" of a 9-week fetus from EarlyAbortionOptions.com (See under "What does the tissue look like?")

Bottom: a picture from WebMD of an 8-week fetus.

Fetal Development Facts: At 9 weeks, the fetus is over half an inch (WebMD) to nearly an inch (BabyCenter), which is basically the size of the penny (0.75 inches). But unlike the "photo" from EarlyAbortionOptions.com, the 9-week fetus has fully formed eyes and fused eyelids. There are newly forming ears, nose tip, and "well-formed" arms and legs with visible fingers and toes. The heart has divided into four chambers and beats at about 170bpm, detectable by Doppler. Teeth have started to form. Organs are starting to work. The brain has cerebral hemispheres and measurable brainwaves. Jaw bones and the collar bone begin to harden. Limbs can move, the neck can turn, hiccups begin (also detectable by ultrasound).

One SPL member, Kristin Monahan, called this clinic about the misinformation on their website. According to Kristin, the woman on the phone asked several times if Kristin was trying to get an abortion, and when she said no, the woman simply said the info on their site was accurate and hung up.

At a time when CPCs are being accused of "misleading" women by not endorsing abortion, we would hope the same standard for accuracy would be applied to pro-abortion sites like EarlyAbortionOptions.com, which is clearly misleading women into believing the fetus basically looks like a dust bunny.