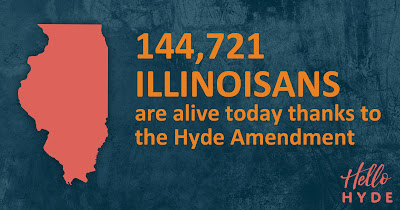 Last year on September 30, we celebrated the 40th anniversary of the life-saving Hyde Amendment with a social media photo campaign, using the hashtag #HelloHyde. Tomorrow is the 41st anniversary, and while 41 may not be as eye-catching, the Hyde Amendment remains a crucial tool to protect low-income children from abortion

Sadly, we mark this anniversary with tragic news: Illinois Governor Bruce Rauner just signed legislation that will destroy the Hyde Amendment in Illinois.

Last year, our #HelloHyde campaign focused on Medicaid kids, presenting their photos (complete with #HelloHyde name tags) and challenging abortion supporters: who among these people should have died a taxpayer-subsidized death?

Though the Hyde Amendment is great a pro-life success, it isn't all-encompassing. The Medicaid program is jointly funded by both federal and state revenues; the Hyde Amendment only covers the federal portion. Most states have followed suit and instituted their own Hyde-like protections, but a handful have not.

Naturally, the abortion industry—struggling to stay afloat as the abortion rate plummets—wants a government bailout, which means destroying the Hyde Amendment wherever possible. Subsidizing abortion will increase abortions, and therefore increase abortion profits; it's Econ 101. And they set their sights on preborn children in Illinois.

The Illinois legislature recently passed a disastrous bill known as HB40 that would eviscerate Illinois' Hyde Amendment protections. The Charlotte Lozier Institute reported that the Hyde Amendment has saved the lives of over 144,000 low-income children in Illinois, and Illinois Right to Life projected that HB40 would, if enacted into law, cost the lives of 12,000 preborn babies annually.

A few days ago, HB40 landed on Governor Rauner's desk for signature. Governor Rauner had given mixed signals. He is a pro-choice Republican who at one point said that taxpayer funding of abortion was too extreme and promised that he would veto HB40. But he started wavering, and the abortion lobby put him under immense pressure to sign the bill.

Of course, the pro-life movement pressured him too. I personally called his office, and so did many of you. But it was an uphill battle: he never respected preborn children for the human beings they are.

Yesterday, he signed a death sentence for approximately 24,000 babies.

I say 24,000 because that's 12,000 times two years; Governor Rauner is up for re-election in 2018, and we will defeat him. We must reverse this horrific decision as soon as possible. Not only Governor Raner, but every legislator who voted in favor of HB40, will face the full electoral wrath of the pro-life movement. These politicians have effectively told 144,000+ constituents that they should be dead! We are not going to let that slide. Let the attack ads begin. And let them feature Illinois residents born through Medicaid.

Posted by secularprolife.org at 7:26 AM