Baby Nielson and the humanity of the preborn child

Jaelyn Barnes had a miscarriage at eleven weeks. Baby Nielson, as you can see in this family photo, was a human being. 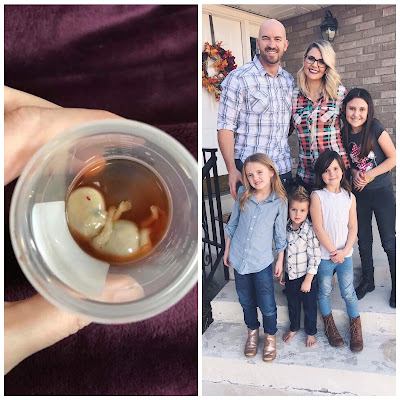 This being Jaelyn's fifth child, she was an experienced mother and their entire family was ecstatic for the newest addition. Jaelyn's husband was serving their community as police officer when they first discovered there wasn't a heartbeat. They were urged not to worry and the midwife advised rechecking in a few days; however, her husband was injured badly on the job and the fetal heartbeat check was put on hold another few days. Nearly a week later, the heartbeat still could not be found. After an ultrasound, it was confirmed that the baby they looked forward to meeting had passed away a week prior.

At this gestation, many people believe that babies are a clump of cells and nothing more. Jaelyn bravely shared this photo of her miscarried baby to spread awareness about how human these children truly are, even at only eleven weeks. In addition, there is a common misconception that because these precious lives are "just a clump of cells," they feel zero pain during abortion.

Dr. Maureen Condic is a professor of neurology at the University of Utah. She testified before Congress that a person's experience of pain evolves over time, beginning in the first trimester:


The neural circuitry responsible for the most primitive response to pain, the spinal reflex, is in place by 8 weeks of development. ... This is the earliest point at which the fetus experiences pain in any capacity. ... A fetus responds just as humans at later stages of development respond; by withdrawing from the painful stimulus.

By 8 to 10 weeks, Dr. Condic says many of the neural connections are formed. How can any person who has the knowledge that a baby can feel the pain of abortion and see this beautiful and perfectly formed child, still think abortion is humane?

[Today's guest post by Heather Hobbs is part of our paid blogging program. Heather is an editor and blogger at Life Defenders.]

Posted by secularprolife.org at 7:48 AM