Want to "live and let live"? Then don't support abortion.

Over the last few years, alternative media figures have gained prominence; one of them is a Youtuber named Dave Rubin. Despite criticizing the left, he describes himself as a liberal and wishes everyone could just “live and let live.”

Rubin believes abortion should remain legal. His rationale is that women have a right to control their bodies—a concept most pro-lifers support. Their problem with abortion? It destroys someone else’s body. And although Mr. Rubin may not agree with that, the facts do. He should really take a look at them.

In Planned Parenthood v. Casey, the Supreme Court said states could limit abortion after viability. But not all states choose to do so; in New Mexico, Southwestern Women’s Options offers abortions at 28 weeks for women who didn’t realize how far along they were. Children are generally considered viable at 24 weeks, but plenty have survived earlier. This little guy did: 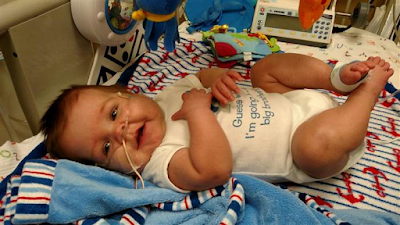 That’s Trevor Frolek, and he was delivered at 23 weeks. I suspect Rubin would concede Trevor was a distinct individual by the time his mother went into labor; wouldn’t that have still been true if she had aborted him instead?

Of course, Trevor’s individuality began earlier than that. Being able to feel pain is evidence of it, and according to Dr. Kawaljeet Anand’s research, children start doing so at 20 weeks. Anand testified under oath that, “If the fetus is beyond 20 weeks of gestation, I would assume that there will be pain caused to the fetus. And I believe it will be severe and excruciating pain.” Most 20 week abortions employ a technique called dilation and evacuation (D&E). Here’s what it involves:


The ability to independently suffer pain stems from having a separate neural system, but proof that a fetus is an individual doesn’t end there. While Rubin has referred to a first-trimester fetus as “cosmic stew,” that “stew” has a developing set of fingerprints at 12 weeks and an observable heartbeat at 6 weeks. A preborn child also has a unique DNA profile. When does that develop?

Dave Rubin is a big fan of choice and personal freedom, and there are a number of ways he can promote those things. For example, he could publicize how abortion isn’t the only alternative to parenting: couples seeking to adopt outnumber available infants, and you can find plenty of waiting families online. He could also point out that Planned Parenthood has a history of hiding abuse and exploitation, which is part of why its funding should should go to federally qualified health centers instead. Both would be consistent with his “live and let live” mantra.

But denying reality and ignoring how abortion ends a life? Sorry Dave, but that just doesn’t fit.