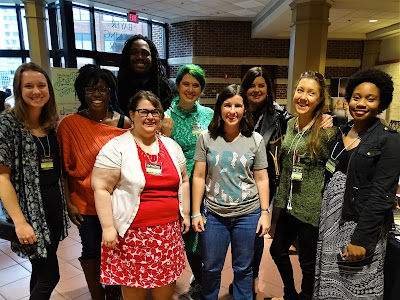 January: We brought the secular pro-life message to San Francisco for the Walk for Life and the regional Women's March. The following week, we were in Washington, D.C., where we participated in the March for Life, witnessed the continuing impact of our fall 2016 #HelloHyde campaign, and spent time with friends old and new. On both coasts, we presented at the Students for Life of America conferences, teaming up with Christina Bennett to train pro-life student leaders on the dos and don'ts of outreach across racial and religious lines. (Check out our January 2018 itinerary here.)

February: Secular pro-lifers joined the #ProtestPP movement in cities across the country. We marked the 35th anniversary of the Martin Container Company scandal.

March: We submitted testimony against an awful Connecticut bill that would have had especially bad (and unconstitutional) consequences for healthcare providers who refused abortion on secular, ethical grounds; the bill died in committee. We dispelled myths about Texas' pro-life, anti-ableist legislation banning "wrongful birth" lawsuits. And Kelsey shadowed Created Equal for a day of activism at University of South Florida.

April: We launched the Fund Women's Health campaign to connect pro-life feminist donors with fantastic women's health clinics that are so much better than Planned Parenthood.

May: Undercover investigators David Daleiden and Sandra Merritt, who were instrumental in uncovering the "baby parts" scandal, were arraigned in San Francisco on bogus criminal charges. Terrisa was there, and has continued to lead the pro-life presence at every court hearing in the case.

Teen mom and valedictorian Maddi Runkles made the news with the help of Students for Life of America; they brought much-needed attention to the problem of faith-based schools punishing pregnant students, thereby incentivizing abortion. In response, Secular Pro-Life supporters shared their stories about unwed pregnancy and church.

On a more personal note, Monica's second daughter was born. And when our dear friends at Rehumanize International were unjustly rejected as sponsors for anti-war marches because they also support peace in the womb, Kelsey sang them a song to cheer them up.

June: Secular Pro-Life co-sponsored the second annual Pro-Life Women's Conference in Orlando. (Count on us being there for the third year: PLWC 2018 will take place in St. Louis, MO.) Terrisa presented at the Californians for Life 2017 summit, and was interviewed on a radio program about the event.

July: Kelsey spoke at the National Right to Life convention in Milwaukee.

September: We called out URGE, a supposed "reproductive justice" organization, for making its internship so inaccessible to student mothers that one student had an abortion to keep her spot. (You can't make this stuff up.) A nasty hurricane prevented much else from happening in September, but Kelsey came out of it safely.

October: We co-sponsored Students for Life of Illinois conference and the Life/Peace/Justice conference. At the former, Kelsey finally met Nick Sansone face-to-face; he's a film student who has signed on to direct Only Human, her pro-life screenplay! At the latter, an excerpt from Only Human was recognized at the create | encounter pro-life art contest. Also in October, Kelsey had an op-ed in America magazine, SPL finally got an Instagram account, and SPL's facebook page reached 20,000 fans.

November: Kelsey gave a presentation to the pro-life student organization at Ave Maria University. We wrote about the disturbing trend of young women having abortions to gain "guardian angels." And you shared your stories of pro-choice to pro-life conversions.

December: We're busy preparing for an incredible 2018! In addition to our March for Life and Walk for Life activities next month, we are working on a number of long-term projects which we are not currently at liberty to divulge, but we are really excited about them. If you would like to help us make 2018 our best year ever, please consider donating.

Thank you so much for the support you gave us to make abortion unthinkable for more people in 2017. We wish you and yours a very happy new year!