The word "fetus" is nothing to fear — or to censor 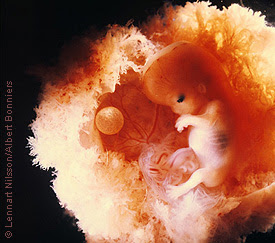 Correction: It now appears that the list of words was not a strict ban, and that the list came not from the Trump administration, but from within the CDC itself.

Last Friday, news broke that the Trump administration has instructed the Centers for Disease Control (CDC) not to use the words "evidence-based," "science-based," "vulnerable," "entitlement," "diversity," "transgender," and "fetus" in official government documents. This is a bizarre decree for a number of reasons, and I personally have thoughts about all seven banned words, but for purposes of this article I will limit my commentary to the last word: fetus.

The list of banned words is neither illegal nor unprecedented. The administration's action does not violate the First Amendment, because the CDC is a government agency, and the government has the right to control its own speech. I'll also acknowledge that it's natural for editorial guidelines to change over time; to give what I hope is a non-controversial example, there are good reasons the word "Negro" no longer appears in official documents.

But a ban on the word "fetus" makes little sense.

Let's start by clarifying the definition. If you're active in the abortion debate, you've likely heard that "fetus" comes from the Latin for "offspring" or "little one." That etymology is correct, but in modern English, "fetus" is not synonymous with "preborn child." Rather, "fetus" is an age designation: it specifically refers to preborn children eight weeks and older. Those younger than eight weeks are called embryos.

Why is "fetus" banned, while "embryo" is not? Your guess is as good as mine.

The distinction is medically significant. By eight weeks, all major organ systems are in place. As a result, a fetus and an embryo may have differing reactions to alcohol, stress, environmental pollutants, and the like. Certain medical interventions, like in utero surgery to correct spina bifida, can only be performed on older fetuses, not on embryos. Also, an embryo is more vulnerable to miscarriage than a fetus is.

Note that the preceding sentence contains two banned words. That's absurd! While I'm confident that the CDC will find some workaround (e.g. "a human in the womb after 8 weeks, hereinafter referred to as an 8+"), the language ban creates a completely unnecessary obstacle to research in prenatal health.

True, abortion advocates frequently misuse the word: "It's not a baby, it's just a fetus!" But their ignorance is their problem, and the pro-life movement would be foolish to respond by abandoning useful scientific language.

Science is on our side. The word "fetus" is nothing to fear — or to censor.

Posted by secularprolife.org at 11:33 AM