Let's talk about abortion and race 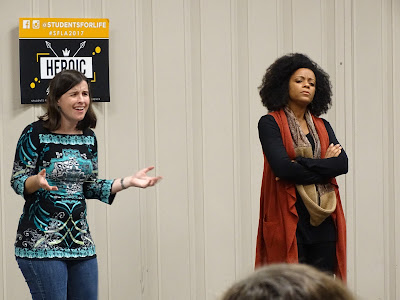 This time last year, I had the pleasure of co-presenting with Christina Bennett at the Students for Life of America east and west coast national conferences. I am a white atheist, and she is a black Christian. Our topic was "Tactics of Inclusion"—she spoke to racial diversity and I spoke to religious diversity. We developed a series of funny, borderline offensive what-not-to-do skits to help students navigate this terrain. There's a video, but it's 35 minutes long and many of you may have missed it. So in honor of Dr. Martin Luther King Jr. Day, I am going to do my (admittedly small) part to improve race relations by summarizing Christina's half of the presentation in writing. Enjoy!

Christina's first skit focused on abortion's disproportionate impact on children of color. We should not be afraid to speak the truth about this horrific reality. There are, however, some incredibly poor ways to do this. Condescension will quickly alienate people. So will needlessly pitting good causes in competition with one another, i.e., "If Black Lives Matter, then abortion should be your top priority." It's even worse with an accusatory slant, i.e., "If you really care about black children dying..."

Just stick to the facts. And remember to listen and learn something from the person on the other side of the conversation, as opposed to giving a one-sided lecture.

In her second skit, Christina played a student who was part of a pro-life organization on campus but had missed the last several meetings. The group's leader, played by yours truly, bumped into her outside of class and asked her what was going on: "I thought this was something you were really passionate about." So far, so good. Christina's character answered:

So, I just feel a little uncomfortable at Life Club sometimes. First off, I’m the only person of color at any of the meetings. Of all the speakers we bring in none of them are minorities and when we talk about helping the black community everyone looks at me like I’m the one person with all the answers. It just makes me feel awkward.

My character's response was to get defensive:

I’m SO sorry. I didn’t even notice that. I never thought of it before. Honestly, I just don’t even see color. I never grew up that way. [laughing] Sometimes I forget that you’re even black!

In the post-skit discussion, Christina had this to say about the phrase "I don't see color":

I've had so many discussions about this phrase, and it's not like it's inherently a bad phrase. I understand what people mean when they say "I don't see color" and I'd guess that if I was to survey you, probably everyone has a different opinion, if you do say that, on what that means. But often it means "I don't discriminate against people. I don't think I discriminate against people, and in my opinion I just treat people the same; I've grown up in a diverse neighborhood, I have a diverse family, and I just don't see people that way." So that's often what people mean when they say that phrase. But what do people hear? Especially people of color, what do they hear when you say that phrase?

Well I know for me, to be honest, when I hear it I think: Really? You don't see color? So you're telling me if a six-foot African-American guy is walking down the street, you can't tell the difference between him and a four-foot Asian woman? I just kind of feel sometimes we're not being honest.

In addition to that, oftentimes I feel like when you're saying you don't see color, then you don't see me. You don't see how different I am. And you don't understand how to then reach me because of my differences.

Christina also mentioned how people have told her that she's "not really black" and similar statements. "I always want to ask, well, why? What negative African-American stereotypes am I not fulfilling for you?"

Aside from avoiding dumb phrases, what could my character have done differently? First, let's get rid of the notion that we have to have all the answers and have them immediately. Conversations about race are complex and probably shouldn't happen on the spot in a random hallway. Rather than being defensive and dismissive, my character could have offered to do lunch and go over possible reforms, like scheduling pro-life people of color as speakers. That way, everyone would have time to stop and think instead of spewing word vomit, Christina's character would feel that her concerns were being taken seriously, and there would be more trust between the two characters.

Again, this is just a summary, and I encourage you to watch the video. I learned a lot in the process of preparing the presentation with Christina, and there is still much to learn. I'm so grateful to be surrounded by people of all colors, working hand in hand to protect the defenseless.