Last weekend, we traveled to San Francisco for the Walk for Life West Coast. California's counterpart to the March for Life brought together people from all walks of life. Liberals and conservatives, atheists and Christians, and people of every race and nationality joined forces in support of children in the womb and their mothers. It was a beautiful sight.

First, on Saturday morning, we met up outside the Asian Art Museum. We heard several inspiring speakers, including Bettina Di Fiore, whose story we shared yesterday. (I reprised my spoken word from the March for Life.)

Then we made our way down Market Street with tens of thousands of like-minded advocates: 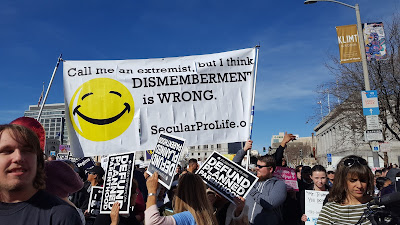 Abortion supporters held a counter-protest along a small section of the route. They had bullhorns and screamed "Walk for Life, that's a lie! You don't care if women die!" over and over. I wanted so badly to ask if they'd heard of Tonya Reaves or Jennifer Morbelli (among many others). A protective cordon of law enforcement officers made any dialogue impossible. But it was probably for the best; there were many children and elderly people walking, and their safety comes first.

The Walk for Life concluded at the Justin Herman Plaza, where young adults from Survivors of the Abortion Holocaust conducted a symbolic "die-in" to remember the victims of Roe v. Wade: 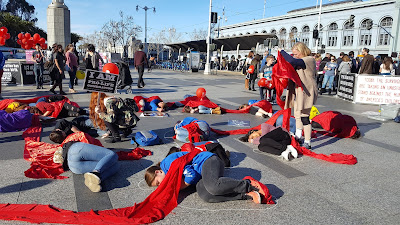 Our next stop—after a lot more walking, because the huge Walk for Life crowd overwhelmed Uber and Lyft—was 1522 Bush Street, where Planned Parenthood hopes to demolish the existing structure and build a "flagship" abortion facility. Not if the good people of Pro-Life San Francisco (led by SPL's very own Terrisa Bukovinac) have anything to say about it!

Check out all of our 2018 west coast photos here.