Fixed that meme for you 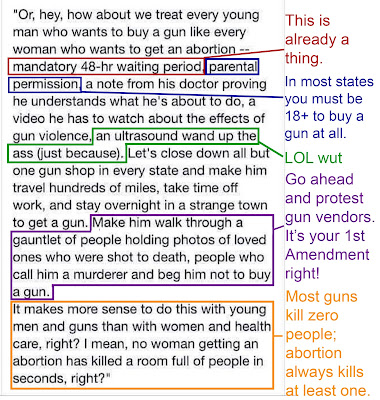 Let's break this down, shall we?

Rather than imposing parental consent laws, most states outright ban minors from buying guns. There are some gaps here, as detailed by The Guardian, because states have different laws for different types of guns. I expect this to be an area of significant focus for gun policy reformers in the coming months. Nevertheless, laws on guns for minors are already stricter than laws on abortions for minors, because Supreme Court precedent prevents enforcement of any age requirement for abortion.

Whoever made the original meme clearly has no idea what pre-abortion ultrasounds are for. Abortion vendors use ultrasound to determine how far along the pregnancy is, which is how they decide which abortion method to use and how much to charge. Ultrasound is also used to detect ectopic pregnancies. Ultrasound laws have nothing to do with whether or not an abortionist will do an ultrasound; they will, as standard procedure. Rather, ultrasound laws exist to stop abortionists from hiding the ultrasound images from their patients. None of this "turn the screen away from her, it's just a clump of cells, ho-hum" nonsense.

Oh, and the wand is optional; you can get an ultrasound with no penetration of any bodily orifices.

Abortion businesses are, sadly, plentiful. There are over 700 abortion businesses in the United States. Only a handful of states are down to one abortion facility. But the number of abortion businesses has decreased substantially in recent years. One factor is decreased demand: fewer women are having unplanned pregnancies, and of those who do, more are choosing life. Another factor is enforcement of the health and safety regulations that shoddy abortionists routinely violate.

On that note, why not emulate sidewalk counselors? There is nothing stopping you from protesting on public sidewalks outside gun shops. Hold up those victim photos. Plead with firearms customers to reconsider. You have the right to freedom of speech... at least until gun vendors respond by enacting "bubble zones" to censor your advocacy. These laws are unconstitutional and the pro-life movement has been fighting them in court for decades.

Abortion is lethal. No doubt, a gun in the wrong hands can be incredibly destructive in a very short period of time. In responsible hands, a gun is unlikely to kill anyone at all. Abortion instruments won't slaughter a room full of people all at once, but abortion consistently takes lives one or two at a time (except in the very rare case of abortion survivors). Over 60 million human beings have lost their lives to abortion since Roe v. Wade. It's not "health care."

Asking whether it makes more sense to stop abortion or to stop gun violence imagines a zero-sum game where none exists. It cynically pits victims of different injustices against one another for no reason.

Posted by secularprolife.org at 7:10 AM