How did this happen?

First, let's show our work. As of 2017, there were 55.8 million Americans with no religious affiliation. The Pew Research Center Forum on Religion and Public Life reports that among the unaffiliated, 23% say abortion should be illegal in all or most cases. 55.8 million times 0.23 is 12.8 million.

The growth in the secular pro-life population is due to at least three factors: 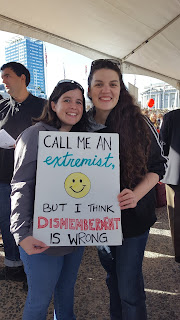 1. More people are leaving religion. In 2012, there were approximately 46 million Americans who answered religion surveys as atheist, agnostic, or "nothing in particular." That number has continued to rise. As there are more secular people, there are naturally bound to be more pro-life secular people. That would be true even if the percentage of "nones" opposed to abortion remained unchanged. But in fact...

2. More non-religious people are taking a pro-life stance. Back when we ran the "6 million" campaign, we pointed to Gallup polls showing that between 15% and 19% of non-religious Americans were pro-life. We're now up to 23%, a gain of 4 to 8 percentage points. Don't get us wrong: we still have a long way to go. But to make that gain despite extremely limited funds and media attention is definitely something to celebrate. (Want to keep the momentum going? Please donate!)

3. Non-religious pro-lifers were previously under-counted. At the time of the "6 million" campaign, the data suggested a true number of between 6.9 and 8.7 million. We rounded down in an abundance of caution because at the time we were a young organization and lacked the know-how to fend off pro-choice P.R. attacks.

The next time you hear someone equate opposition to abortion with religious dogmatism; the next time a national commentator erases your existence; the next time a group that claims to speak for all secular people advocates for abortion on demand; remember that you have backup. We are 12.8 million strong. The abortion industry ignores us at its peril.