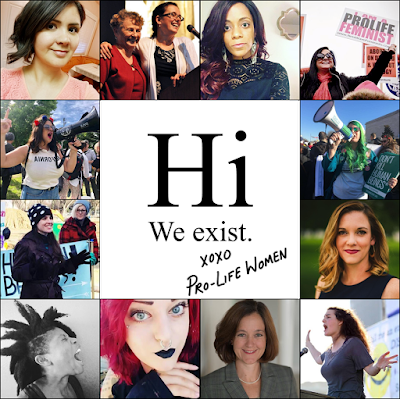 Pro-choice feminist groups continually insist you can't be feminist and "anti-choice." Netflix' recent "Reversing Roe" documentary cut tons of footage of pro-life women and showcased almost exclusively men for the anti-abortion side. The incessant "war on women" trope leaves casual observers believing this is a strongly gendered debate, with women fiercely defending abortion and men trying to control women’s bodies. It's all a lie.

Make no mistake: we aren’t being overlooked because we’ve been sitting quietly in the background. Women lead many of the major pro-life organizations and speak out on the issue regularly. There are countless female pro-life leaders in addition to the women pictured above, such as Carol Tobias of National Right to Life​, Lila Rose of Live Action​, Kristan Hawkins of Students for Life of America​, Marjorie Dannenfelser of Susan B. Anthony List​, Abby Johnson of And Then There Were None​, and Serrin Foster of Feminists for Life​. Nellie Gray founded the March for Life​, which has consistently been the largest pro-life event and largest annual political march for years. We sure would appreciate it if the pro-choice side and the media would stop trying so hard to pretend we don’t exist for the sake of a narrative. We are RIGHT. HERE.

Women in graphic, starting at the top left and moving clockwise:


Update, 5/20/19: In this excellent Vox article, Matthew Yglesias summarizes quite a bit of polling data finding little if any difference in views on abortion by gender.

Typically if the pro-choice side acknowledge pro-life women at all, in the same breath they dismiss us as internalized misogynists. Thus, apparently, no matter what data show about gender and views on abortion, it can't undermine the non-falsifiable theory that those against abortion just hate/want to control women.

But if the roughly half of American women who are against abortion are just internalized misogynists, why do they generally break with men on issues outside of abortion? Polls find substantial gender differences on views of gender pay gap, rape culture, and gender equality. And yet--for decades now--there has been no such gender difference in views on abortion.

The reality is women as well as men can and do recognize our prenatal children as valuable, and not simply in a "personal preference" way. It's not about misogyny; it's about caring about humans at every developmental stage.


On federal funding of “family planning and birth control for lower-income women,” the gap between men’s and women’s answers was about 10 to 20 percentage points. On funding of Planned Parenthood clinics that provide “birth control, STD testing and treatment, and cancer screenings,” the gap was similar. But on funding clinics that “also provide abortions” or that “also provide referrals for abortions,” the gender gap disappeared. The Harvard poll found the same pattern: Women were more likely than men to support funding of Planned Parenthood, but not more likely to support Medicaid coverage of abortions.

Why would the gender gap on reproductive health care dissolve when the question turns to abortion? Apparently, something about abortion bothers a lot of women in a way that birth control and STD treatments don’t.

Update 7/29/21:
In this October 2016 Politico report, when asked whether Planned Parenthood should receive federal funding that can't be used for abortions, women were significantly more likely than men to say yes (63% to 52%). In contrast, when asked whether Medicaid should be used to fund abortion, the majority (58%) opposed the idea, with no statistically significant difference between men's and women's responses. (See the text around Figures 15 and 16.)
Update 9/9/21:
This September 2021 Washington Post article ("In Texas and beyond, conservative Republican women are helping lead the fight to restrict abortion") describes the women in state legislatures who have actively supported (written, introduced, sponsored) abortion restrictions, the women who lead interest groupups providing model legislation, the women who head pro-life groups, and the women judges who have voted to allow abortion restrictions.
Further Reading:

The "Anti-Choice War On Women"
7 things pro-lifers wish our pro-choice friends understood about us.
Can I Be A Feminist Too?
An Interview with New Wave Feminists
When did feminists abort the pro-life position?