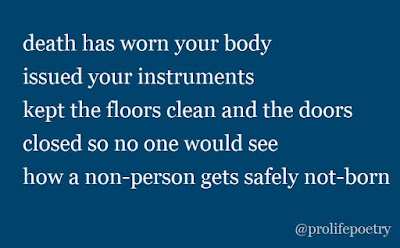 Every year on September 28, abortion activists organize the International Safe Abortion Day, a day that promotes “accessible, legal and safe abortion.” This includes the usual claims that abortion is inevitable even if illegal and that the only way for women and their families to be safe is to make it legal and easy to access. But what about the people who actually come face to face with the chilling, clinical reality of abortion?

As someone who has been indirectly harmed by abortion, I want to spare a thought for its other unlikely victims: the medical staff who find themselves in the position of having to do abortions. Like the doctors of two county hospitals in Romania who have recently come under attack by journalists and activists for unanimously refusing to perform any more abortion procedures (except in cases of medical emergency). But also the ones who haven't stopped. Those who still manage to assuage their conscience by pausing abortions each year during Holy Week, Easter and Christmas, only to go back and keep doing what is expected of them. Even the ones who feel no remorse, only the conviction that they're helping women. Because that “safe abortion” has to be provided by someone, no matter how difficult or disturbing it is. The following poem is for them.


I've written this poem as part of my process of understanding abortion providers and practicing compassion, because I believe they need it more than anyone, trapped as they are in what they've done and with the burden of other people's expectations to keep doing it. Everyone involved in an apparently safe abortion (the unborn, women, men, doctors) usually loses something: their life, their family or their peace of mind.

[Today's guest post by Alexandra Moldoveanu is part of our paid blogging program.]

Posted by secularprolife.org at 7:32 AM