I'm a Millennial Woman, and I Voted Yes on Amendment 1

My state of West Virginia just passed a constitutional amendment specifying that our constitution does not contain the right to elective abortions nor require taxpayer funding for those abortions. The vote was close—52 to 48 percent—and I watched as the results came in. Now I watch as reactions from fellow West Virginians appear on sites like Facebook and Twitter. Many are based around misconceptions of what the law means: that there are no exceptions (a prior 1993 law which now goes back into effect does require funding for cases of rape, incest, and medical emergencies) and that women will therefore die of a lack of basic healthcare.

They also contain blame. Blame of anyone who voted to pass the law, but more-so, blame of the women who voted Yes. These women are accused of setting the state back by decades, of putting other women’s lives in immediate danger, and of ripping basic rights away. I am one of these women. And because I am a left-leaning political independent, occasional social justice activist and pagan, no one ever sees it coming.

I am one of the women who voted Yes, and I represent a different kind of pro-life, a kind most people don’t realize exists. I don’t pray to God to end abortion. This isn’t about religion for me. It’s about moving beyond the beginning of biological human life and feeling my way around far-reaching philosophical questions. When does human life first deserve our protection? When does “personhood” begin? But more than that, it’s the radical idea of getting to the root and figuring out why women are choosing abortion in the first place and what that means. 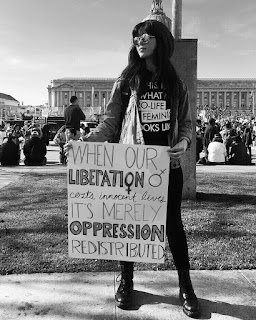 Once you know that I’m pro-life, some of my opinions are expected. I believe a pre-born baby—a fetus, if you will—is a vulnerable human life that deserves protection. I believe a person’s right to personal liberties is justifiably limited when another life is inextricably tied up with those liberties. But there are other ideas that are less common. You see, I also believe that social inequality is putting women in a position to make difficult decisions no one should have to make. That women are choosing between giving birth and financial security. Between giving birth and career success. And I believe that when we’re choosing between giving birth and happiness, we have a serious problem.

These feminist undertones separate my kind of pro-life from dominant pro-life thought. In a way, I find that they begin to bridge the left and the right, the pro-life and the moderately pro-choice. Some of us in this pro-life movement driven by ethics and social justice rather than religious dogma want to pass laws to stop abortion. Some don’t, and this is where we see some seriously (uncomfortably to some) blurry lines. What we have in common is that we all want to see less abortion, and we know this involves more than voting Yes on an amendment. It requires asking difficult questions and being open to the possibility that society may, in fact, be built in favor of certain groups, leaving women and others with more barriers to achieving basic security and success.

It leads us to ask how we can create the beginnings of a society in which no woman feels the need to choose between these incredibly important things—a happy, secure life and her children. The answers are not simple and they are not singular. We can look at social justice, at assistance for women with children, at applying pressure to corporations to make maternal leave and other relevant benefits standard. These aren’t the kinds of conversations you see from many pro-life groups, and so people assume that we care about birth only or that we’re brainwashed by dogma or we’re the hopelessly uneducated who oppress themselves. We are not your typical pro-lifers or what you expect us to be, but we are here.

I am a woman who voted Yes on Amendment 1 and you never would have guessed. I am not the kind of pro-life you’re used to.

[Today's guest post by Kalina Jones is part of our paid blogging program.]