Many people argue that abortion is justified because of bodily rights. The idea is that it doesn’t matter if the fetus is a person or not, because no person can use your body against your will. If that principle is generally true and generally applies to abortion, it makes sense to be pro-choice regardless of whether or not you think the fetus is a valuable human.

McFall v. Shimp
People who argue that bodily rights are paramount sometimes point to the court case of McFall v. Shimp. This isn’t a huge court case—it wasn’t the Supreme Court, it was the Court of Common Pleas in Pennsylvania—but it’s an important case because of the unique case elements.

Robert McFall was an asbestos worker with anemia. He was given a 20% chance of surviving another year unless he got a bone marrow transplant. His relatives were tested and his cousin, David Shimp, was a likely match. Unfortunately Shimp didn’t want to donate his bone marrow. In desperation McFall took Shimp to court, hoping to compel Shimp to give this life-saving donation. However the court sided fairly quickly with Shimp. The judge stated,

Morally, this decision rests with the Defendant, and, in the view of the Court, the refusal of the Defendant is morally indefensible. For a law to compel the Defendant to submit to an intrusion of his body would change every concept and principle upon which our society is founded.

In other words, even though Robert McFall was clearly a person with as much moral worth as you and I, and even though he would die without this bodily donation, the Court would not compel Shimp to donate to McFall. And McFall did die shortly thereafter.

The Violinist
Another example of this idea is a thought experiment by Judith Jarvis Thomson. She wrote an essay called “A Defense of Abortion” in which she argued that we need not debate whether the fetus is a person because abortion is justified anyway. To illustrate her point, she asks you to imagine you wake up one day in a hospital bed and your circulatory system is hooked up to a man in the bed next to you. You learn this man is a very talented and famous violinist with a fatal kidney ailment, and his fans--the Society of Music Lovers--have somehow reviewed all available medical records and learned that you are the only person with the right kidney or blood type to filter the poisons from the Violinist’s blood. So the Society of Music Lovers kidnaps you, knocks you out, and attaches you to the Violinist. 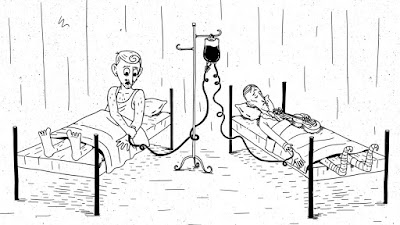 The hospital director enters the room and says he is terribly sorry—if he had realized what was happening he would have never allowed it. Nevertheless, you’re now attached to the Violinist and if you unplug, the man will die. But if you stay plugged in for nine months, the Violinist will be cured and you can each go on your way.

True Analogies
I agree with both the real life example of McFall v. Shimp and the hypothetical example of the Violinist. I don’t think Shimp should have been legally required to donate to McFall, and I don’t think you should be legally required to stay hooked up to the Violinist. And yet I still think most abortions should be illegal. Is that a contradiction?

McFall v. Shimp and The Violinist are not analogous to abortion; if they were I would think bodily donation should be required in those cases too.

In order for a bodily rights argument to be analogous to abortion, the hypothetical needs to include the following five elements:
Some suggest that last factor is being too nitpicky. If the person is going to be dead either way, what difference does it make whether you neglect to save him versus actively kill him?

But the case lacks the remaining three criteria:
Shimp had nothing to do with the fact that McFall's life was in danger. (And even though Shimp was in no way responsible for McFall's condition, the court still found Shimp's refusal to donate "morally indefensible.") Additionally, in coming to a ruling, the Court discussed the fact that there could be an unrelated person out there who was a bone marrow match. (If you’re interested in potentially saving lives through bone marrow donation, please check out BeTheMatch.org.) Finally, Shimp neglected to save McFall; he didn't actively kill his cousin.
If McFall v. Shimp were truly analogous to abortion, it would involve Shimp making a decision that he knew could endanger McFall. Say there was some button Shimp could press that made him feel wonderful; he knew pushing the button involved the remote chance that McFall would contract a fatal ailment only Shimp could save him from. Still, Shimp figured the chance was too small to worry about, and so he pushed the button anyway. Then McFall did get a fatal illness, and he reached out to Shimp to save him. Shimp declined ...and then shot McFall in the head. That’s abortion.

The Violinist Revisited
The Violinist thought experiment suffers from similar limitations. It’s a bit closer to the proper analogy because Thomson includes the fact that you are the only person who can save the Violinist. So The Violinist has the three elements:

But the thought experiment fails to meet the remaining two criteria:
In the thought experiment, you didn’t choose to risk the Violinist’s life, nor did you choose to hook yourself up to him. In fact a major aspect of the story is that you were kidnapped and hooked up to the Violinist against your will. You very specifically had no choice in the matter. Furthermore you don’t kill the Violinist. You are choosing whether or not to unplug from him and let him succumb to his ailment; you’re not choosing whether to smother him with a pillow.

When bodily rights arguments are adjusted to include all five criteria, they become pretty unpersuasive. At best the conclusion sounds incredibly immoral, and at worst it also sounds very illegal.

Roe v. Wade
It’s important to also understand what the Supreme Court case legalizing abortion, Roe v. Wade, had to say about bodily rights. During oral arguments they did argue that the woman should be able to get an abortion because it’s her body and thus her choice. However SCOTUS did not ground the right to abortion in bodily rights; instead they grounded it in a right to privacy and explicitly rejected the bodily rights argument:

Huffman also notes that Roe v. Wade didn’t even consider the fetus a person and yet still allowed for compulsory bodily donation to keep another entity alive. How much stronger would the case be if the law recognized the fetus as a person?*

Consider the fact that most Americans believe abortion is justified only at earlier stages of pregnancy or only under more severe circumstances. If you believe elective abortion should be illegal at later stages of the pregnancy, your stance implies bodily right are not sacrosanct. For people who view the embryo and fetus as morally valuable humans from the beginning, bodily rights don’t even come close to justifying the vast majority of abortions.

*During oral arguments the justices and plaintiffs suggested that if we recognized the fetus as a person under the 14th amendment, it would be almost impossible to justify legal abortion. Remember that background when people claim Roe v. Wade remained neutral on the question of when life begins.