Personhood based on human cognitive abilities.

What difference is there (if any) between a human organism and a “person”? Is there such thing as a human non-person? How do we determine which human organisms have moral worth and merit social protection?

People have given me a variety of suggestions for the factors human organisms need to be morally relevant, including connection to society, viability, the ability to feel pain, or conscious awareness. For different reasons I find these moral cutoffs pretty ad hoc and problematic (see Further Reading at the end of this post).

But some suggest you aren't a “person” until you exhibit human-specific cognitive abilities. To my mind this definition of personhood is more intuitive, especially for secularists. What is it that we value about humans? What sets us apart from other known species? It makes sense to me that it would be our unprecedented cognitive abilities. While there are certain species that have shown impressive levels of cognition compared to most others, they still don’t come anywhere close to the level of complexity in language, social interactions, and creativity that humans achieve. So if we’re taking a step back from the abortion debate in general and asking “What do we value about the human species?” and you answer “Our cognitive abilities,” that makes sense to me.

I think if I were pro-choice, human-specific cognitive abilities would be my definition of personhood. Of course I'm not pro-choice, and in this post I’ll explain why this definition just doesn’t quite get me there.

People who emphasize human cognition typically consider infanticide—killing human neonates or infants—horrific. But if abortion is justified and infanticide is horrific, it can’t be human-specific cognition that separates the two. There is nothing magical about birth in terms of our cognition.


Quite the opposite, humans are specifically underdeveloped in terms of cognition when we’re born. For our first two years functional networks in our brains swiftly gain structure. Here’s passage from a 2017 publication in NeuroImage:

Here’s a table summarizing their assessment strategies. You can read more about it in the publication:


The neurons and neural connections that ultimately “make us human” are still proliferating rapidly during our first few years:


Human neonates are comparatively useless because at that point we still have such a huge amount of brain development ahead of us. This idea is well known in evolutionary biology. Sea turtles are born and soon start hauling toward the sea. Giraffes are born and within days are walking around. Have you ever held a human newborn? We can’t even raise our heads for the first two months or so. We are remarkably helpless and dependent. Scientific American talks a bit more about why:


Human infants are especially helpless because their brains are comparatively underdeveloped. Indeed, by one estimation a human fetus would have to undergo a gestation period of 18 to 21 months instead of the usual nine to be born at a neurological and cognitive development stage comparable to that of a chimpanzee newborn. 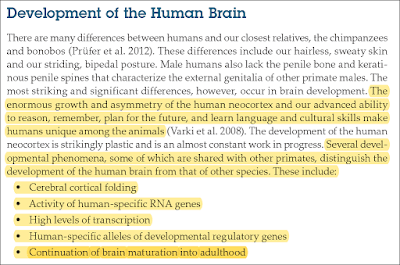 Gilbert & Barresi point out that it is uniquely human for our brains to continue maturing into adulthood. Here is an illustration from the same text showing how myelination (basically coating our nerves in a way that allows nerve impulses to travel more quickly) continues to increase even up to age 20.

It isn’t only those of us against abortion who have noticed this connection. In their infamous 2012 publication “After-birth abortion: why should the baby live?” Alberto Giubilini and Francesca Minerva argue that it should be permissible to practice “after-birth abortion” on healthy human newborns because the newborn and fetus are morally equivalent: both are human beings and potential persons but neither are actual persons due to their insufficient level of mental development.

I recognize that the vast majority of pro-choice people find this idea despicable. Pro-choice people love babies and frequently have their own children and don’t in any way intend to normalize infanticide. My point is not to suggest that anyone who advocates for abortion must feel cavalier about killing newborn babies. My point is that the idea that our value comes from present human-specific cognition necessarily devalues not only fetuses but also infants. That is why I can’t hold such a position.