Secular Pro-Life had a very busy 2018. Here are the highlights. 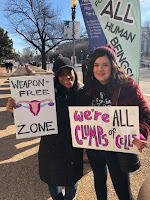 In January, we participated in both the March for Life in Washington, D.C. and the Walk for Life in San Francisco, CA. SPL president Kelsey Hazzard spoke at Georgetown University for a conference with the theme "(Ir)religiously Pro-Life: The Future of the Movement in a Secular World," and both Kelsey and SPL co-admin Terrisa Bukovinac spoke at the pre-March for Life meetup organized by Rehumanize International. Cecile Richards announced her retirement as the head of Planned Parenthood, and we sang her farewell. On this blog, we covered the flaws of international "unsafe abortion" studies, legal challenges to bans on abortion for Down Syndrome, and the relationship between abortion laws and abortion rates. Our blogging continued apace in February (this one is my favorite) as we recovered from our hectic January schedule. In March, pro-lifers rallied in front of the Supreme Court as it heard arguments in NIFLA vs. Becerra; the Court later ruled that California's attempt to force pro-life pregnancy centers to advertise abortion is unconstitutional. Terrisa recorded a video for Illinois Right to Life's "Heart2Heart" educational program. On the blog, we shared insights from undercover attendance at a NARAL training session and reported on a South Carolina abortion business caught taking human remains to a gas station.

In April, we rallied against SB320, the California bill that would have brought abortion pill vendors to college campuses; the governor ultimately vetoed it, but abortion extremists plan to introduce it again. In other news, a study on abortion pill reversal was published, as was a study proving that contrary to previous propaganda, defunding Planned Parenthood in Texas did not cause a spike in the maternal mortality rate. (The actual culprit? Changes to the death certificate form.) May was dominated by the tragic news that Ireland voted to remove the right to life for unborn children from its constitution. Stateside, SPL joined a coalition urging Title X reforms to prevent abortion businesses from exploiting funds intended for nonviolent family planning. We also got our 501(c)(3) status, and you can make your tax-deductible donation here! In June, we launched the #NextNominee campaign, petitioning the White House to nominate a pro-life woman to the Supreme Court... and boy would the nation have been spared a lot of headache and heartache if our advice had been heeded. That's all we'll say about that. Also in June, we exhibited at the Pro-Life Women's Conference.

In July, Kelsey spoke at the National Right to Life Convention, while Terrisa represented SPL at the Democrats for Life of America conference. July was also a big month for research-related blog posts, particularly on the relationship between pro-life laws and unplanned pregnancy and abortion rates. In August, we announced that the number of non-religious pro-life Americans has grown to 12.8 million, and released an updated version of our "Why Should Non-Christians Care About Abortion?" brochure. September brought the Let There Be Life Conference at UC Berkeley, where co-admin Monica Snyder brilliantly debunked three pro-choice myths. Kelsey spoke at Yale University about the intersection of law and science in the Supreme Court's abortion decisions. On the blog, we shared the evidence that even in the third trimester, babies are aborted for non-medical reasons.

In October, we presented at the Rehumanize conference in Pittsburgh. Kelsey also won an award in Rehumanize's Create | Encounter art contest for her piece "Dilation & Evacuation." In November, Monica was supposed to debate a pro-choice professor, but sadly, the event was cancelled at the last minute due to the California wildfires. We do hope to reschedule for early next year, and in the meantime, you can read the many blog posts arising from her debate preparation.

And that brings us to now! We are hard at work preparing for January 2019. We hope you will join us at the March for Life and related activities. We also want to hear from you about your priorities for the coming year. What did you like about our work in 2018? What would you have us do differently? We're all ears. Thank you for your tremendous support, and happy new year!

Posted by secularprolife.org at 7:56 AM